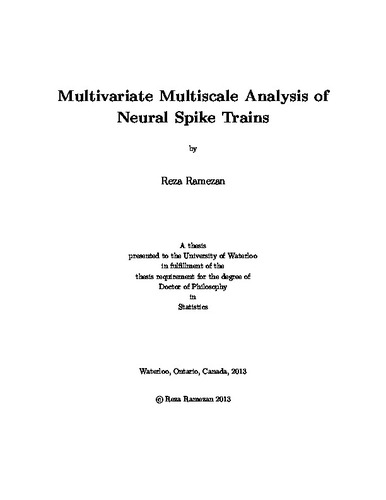 This dissertation introduces new methodologies for the analysis of neural spike trains. Biological properties of the nervous system, and how they are reflected in neural data, can motivate specific analytic tools. Some of these biological aspects motivate multiscale frameworks, which allow for simultaneous modelling of the local and global behaviour of neurons. Chapter 1 provides the preliminary background on the biology of the nervous system and details the concept of information and randomness in the analysis of the neural spike trains. It also provides the reader with a thorough literature review on the current statistical models in the analysis of neural spike trains. The material presented in the next six chapters (2-7) have been the focus of three papers, which have either already been published or are being prepared for publication. It is demonstrated in Chapters 2 and 3 that the multiscale complexity penalized likelihood method, introduced in Kolaczyk and Nowak (2004), is a powerful model in the simultaneous modelling of spike trains with biological properties from different time scales. To detect the periodic spiking activities of neurons, two periodic models from the literature, Bickel et al. (2007, 2008); Shao and Li (2011), were combined and modified in a multiscale penalized likelihood model. The contributions of these chapters are (1) employinh a powerful visualization tool, inter-spike interval (ISI) plot, (2) combining the multiscale method of Kolaczyk and Nowak (2004) with the periodic models ofBickel et al. (2007, 2008) and Shao and Li (2011), to introduce the so-called additive and multiplicative models for the intensity function of neural spike trains and introducing a cross-validation scheme to estimate their tuning parameters, (3) providing the numerical bootstrap confidence bands for the multiscale estimate of the intensity function, and (4) studying the effect of time-scale on the statistical properties of spike counts. Motivated by neural integration phenomena, as well as the adjustments for the neural refractory period, Chapters 4 and 5 study the Skellam process and introduce the Skellam Process with Resetting (SPR). Introducing SPR and its application in the analysis of neural spike trains is one of the major contributions of this dissertation. This stochastic process is biologically plausible, and unlike the Poisson process, it does not suffer from limited dependency structure. It also has multivariate generalizations for the simultaneous analysis of multiple spike trains. A computationally efficient recursive algorithm for the estimation of the parameters of SPR is introduced in Chapter 5. Except for the literature review at the beginning of Chapter 4, the rest of the material within these two chapters is original. The specific contributions of Chapters 4 and 5 are (1) introducing the Skellam Process with Resetting as a statistical tool to analyze neural spike trains and studying its properties, including all theorems and lemmas provided in Chapter 4, (2) the two fairly standard definitions of the Skellam process (homogeneous and inhomogeneous) and the proof of their equivalency, (3) deriving the likelihood function based on the observable data (spike trains) and developing a computationally efficient recursive algorithm for parameter estimation, and (4) studying the effect of time scales on the SPR model. The challenging problem of multivariate analysis of the neural spike trains is addressed in Chapter 6. As far as we know, the multivariate models which are available in the literature suffer from limited dependency structures. In particular, modelling negative correlation among spike trains is a challenging problem. To address this issue, the multivariate Skellam distribution, as well as the multivariate Skellam process, which both have flexible dependency structures, are developed. Chapter 5 also introduces a multivariate version of Skellam Process with Resetting (MSPR), and a so-called profile-moment likelihood estimation of its parameters. This chapter generalizes the results of Chapter 4 and 5, and therefore, except for the brief literature review provided at the beginning of the chapter, the remainder of the material is original work. In particular, the contributions of this chapter are (1) introducing multivariate Skellam distribution, (2) introducing two definitions of the Multivariate Skellam process in both homogeneous and inhomogeneous cases and proving their equivalence, (3) introducing Multivariate Skellam Process with Resetting (MSPR) to simultaneously model spike trains from an ensemble of neurons, and (4) utilizing the so-called profile-moment likelihood method to compute estimates of the parameters of MSPR. The discussion of the developed methodologies as well as the ``next steps'' are outlined in Chapter 7.