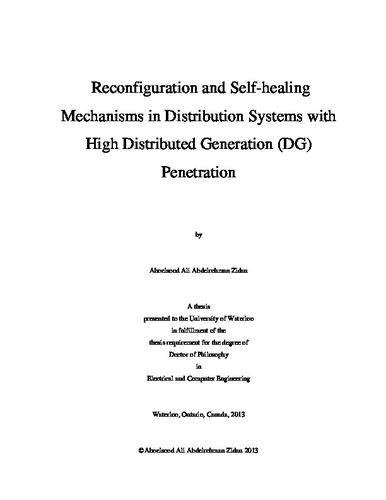 Recently, interest in Smart Grid (SG) as a tool for modernization and automation of the current distribution system has rapidly increased. This interest can be explained by the common belief that SG technologies greatly enhance system reliability, power quality and overall efficiency. One of the most important objectives of an SG is to accommodate a wide variety of generation options. This objective aligns with the new trends and policies that encourage higher penetration levels of Distributed Generation (DG) according to environmental, regulatory and economical concerns. Most DG units are either renewable or low emission energy sources, thus meeting the Canadian emission portfolios, while they remain attractive for both utilities and customers for different reasons. DG units can postpone large investment in transmission and central generation, reduce energy losses, and increase system reliability and power quality. SG is centered on several objectives such as self-healing, motivating consumers to participate in grid operation, resisting attacks, accommodating a wide variety of DG units and storage devices, and optimizing assets. Yet, one of the main goals of SG is to increase the reliability of power systems. Reliability is a vital factor in power system performance, due to the full dependence of today’s life on electricity and the high cost of system outages, especially for critical loads. Therefore, one of the main salient features of SG is its ability of self-healing. The insertion of DG units changes distribution networks from being passive with unidirectional power flow and a single power source (the primary substation) towards active networks with multi-directional power flow and several power sources (the primary substation, along with DG units). As a result, the interconnection of DG units creates several impacts on different practices such as voltage profile, power flow, power quality, stability, reliability, fault detection, and restoration. Current policies call for the direct disconnection of all DG units once any failure occurs in the network. However, with a high DG power penetration, the utilities cannot operate the system efficiently without the DG units’ support. Furthermore, automatic disconnection of the DG units during faults reduces the expected benefits associated with DG units drastically. Motivated by the above facts, the overall target of this thesis is to introduce distribution system mechanisms to facilitate realizing the concept of Smart Distribution System (SDS) in both normal and emergency modes. In particular, three main functions are dealt with in this research work: distribution network reconfiguration, DG allocation and self-healing. First, for distribution network reconfiguration, a method based on genetic algorithm is presented to address the reconfiguration problem for distribution systems while the effect of load variation and the stochastic power generation of renewable-based DG units are taken into consideration. The presented method determines the annual distribution network reconfiguration scheme considering switching operation costs in order to minimize annual energy losses by determining the optimal configuration for each season of the year. Second, for DG allocation, a joint optimization algorithm has been proposed to tackle the DG allocation and network reconfiguration problems concurrently, as these two issues are inherently coupled. The two problems are dealt with together while the objectives are minimizing the cost, as an economic issue, and greenhouse gas emissions, as an environmental issue. The proposed method takes the probabilistic nature of both the renewable energy resources and loads into account. The last operation function dealt with in this thesis is distribution system restoration. In order to accomplish this function, two stages are presented: In the first stage, numerous practical aspects related to service restoration problem have been investigated. These aspects include variations in the load and customer priorities, price discounts for in-service customers based on their participation in a load-curtailment scheme that permits other customers to be supplied, the presence of manual and automated switches, and the incorporation of DG units (dispatchable and wind-based units) in the restoration process. In the second stage, the smart grid concept and technologies have been applied to construct a self-healing framework to be applied in smart distribution systems. The proposed multi-agent system is designed to automatically locate and isolate faults, and then decide and implement the switching operations to restore the out-of-service loads. Load variation has been taken into consideration to avoid the need for further reconfigurations during the restoration period. An expert-based decision-making algorithm has been used to govern the control agents. The rules have been extracted from the practical issues related to the service restoration problem, discussed in the first stage.