Development of a Cyclists' Route-Choice Model: An Ontario Case Study 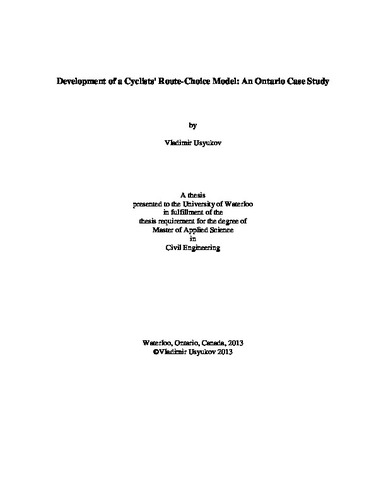 This research presents the first North American route-choice model for cyclists developed from a large sample of GPS data. These findings should encourage all interested municipalities to implement cycling as part of their transportation planning by determining key designing and planning factors to encourage cycling. The analysis is based on processing revealed preference data obtained from 415 self-selected cyclists in Waterloo, Ontario, which corresponded to 2000 routes. Cyclists' route decisions were modeled using multinomial logit framework of discrete choice theory. The main finding involved in capturing two different behaviour groups, namely experienced and inexperienced cyclists. This was subsequently reflected in the two developed models. The key factors impacting route-choice were found to be trip length, speed, volume, bicycle lane presence and percent of uphill gradient that cyclists face. The predictive power of the best model was 65%. The outlier analysis found that the relative significance of uphill gradient coefficient in one circumstances and perhaps the exclusion of unobserved variables, in other circumstances could be the cause why probability of actual choice was not predicted by both models all the time. In addition, this research involved in the development of a transferability study involving route-choice modeling for cyclists. The analysis is based on the revealed preference data obtained from 255 self-selected cyclists in Peel Region, Ontario, which corresponded to 425 unique routes. The choice set contained actual routes and a combination of alternatives obtained by labeling and impedance rules. The transferability of Waterloo's model to Peel Region was 37%. This means that cyclists behaviour in the Peel Region can be predicted correctly by travel length, bicycle lane presence and percent of uphill gradient for every third cyclist.