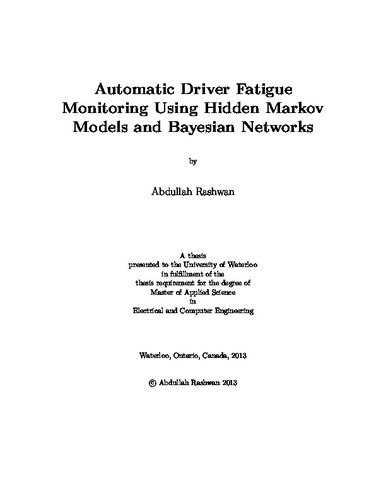 The automotive industry is growing bigger each year. The central concern for any automotive company is driver and passenger safety. Many automotive companies have developed driver assistance systems, to help the driver and to ensure driver safety. These systems include adaptive cruise control, lane departure warning, lane change assistance, collision avoidance, night vision, automatic parking, traffic sign recognition, and driver fatigue detection. In this thesis, we aim to build a driver fatigue detection system that advances the research in this area. Using vision in detecting driver fatigue is commonly the key part for driver fatigue detection systems. We have decided to investigate different direction. We examine the driver's voice, heart rate, and driving performance to assess fatigue level. The system consists of three main modules: the audio module, the heart rate and other signals module, and the Bayesian network module. The audio module analyzes an audio recording of a driver and tries to estimate the level of fatigue for the driver. A Voice Activity Detection (VAD) module is used to extract driver speech from the audio recording. Mel-Frequency Cepstrum Coefficients, (MFCC) features are extracted from the speech signal, and then Support Vector Machines (SVM) and Hidden Markov Models (HMM) classifiers are used to detect driver fatigue. Both classifiers are tuned for best performance, and the performance of both classifiers is reported and compared. The heart rate and other signals module uses heart rate, steering wheel position, and the positions of the accelerator, brake, and clutch pedals to detect the level of fatigue. These signals' sample rates are then adjusted to match, allowing simple features to be extracted from the signals, and SVM and HMM classifiers are used to detect fatigue level. The performance of both classifiers is reported and compared. Bayesian networks' abilities to capture dependencies and uncertainty make them a sound choice to perform the data fusion. Prior information (Day/Night driving and previous decision) is also incorporated into the network to improve the final decision. The accuracies of the audio and heart rate and other signals modules are used to calculate certain CPTs for the Bayesian network, while the rest of the CPTs are calculated subjectively. The inference queries are calculated using the variable elimination algorithm. For those time steps where the audio module decision is absent, a window is defined and the last decision within this window is used as a current decision. The performance of the system is assessed based on the average accuracy per second. A dataset was built to train and test the system. The experimental results show that the system is very promising. The performance of the system was assessed based on the average accuracy per second; the total accuracy of the system is 90.5%. The system design can be easily improved by easily integrating more modules into the Bayesian network.