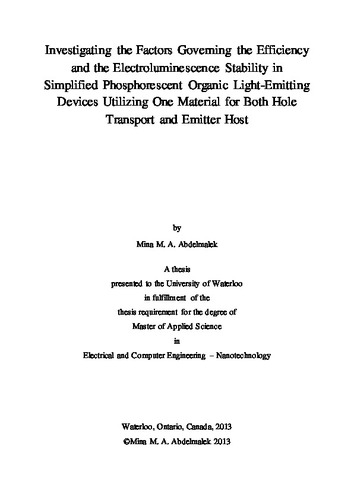 Organic Light-Emitting Devices (OLEDs) have reached industrial maturity in display technology, since OLEDs provide salient advantages such as high brightness, fast response, wide viewing angle, mechanical flexibility, and low cost manufacturing. Due to the ability of electroluminescence (EL) from triplet excited states as well as singlet excited states, phosphorescent OLEDs (PHOLEDs) have a potential to achieve 100% internal quantum efficiency. Therefore, PHOLEDs can offer a competitive external quantum efficiency. However, the operational stability of PHOLEDs is relatively poor. Several mechanisms have been proposed to address the chemical and physical phenomena associated with intrinsic degradation of PHOLEDs, nevertheless, the reasons behind voltage rise and luminance loss accompanying PHOLEDs long term operation are not yet well understood. The state of the art p-i-n PHOLEDs offer relatively high efficiency and low efficiency roll-off. However, this technology is characterized by structure complexity. Therefore, much of the current research on PHOLEDs focuses on the development of the simplest possible and most easily processed architecture that can deliver the optimal combination of device properties. Simplified PHOLEDs, utilizing one material for both hole transport and emitter host, can be a good candidate for replacement of p-i-n technology. Simplified PHOLEDs offer higher efficiency than the p-i-n PHOLEDs , yet, their EL stability is found to be poor. In this thesis, the role of the ITO/organic interface on simplified PHOLEDs efficiency will be investigated. Furthermore, possible degradation mechanisms at the ITO/organic interface will be explored. Moreover, we will correlate degradation at the ITO/organic interface to PHOLEDs operational stability. Eventually, organic layers modifications including but not limited to emissive layer (EML) will be examined. By studying the indium tin oxide (ITO)/organic interface in simplified PHOLEDs, it was found that this interface is critical to PHOLEDs performance. The study shows that, this interface is critical to the PHOLED overall stability and is considered as one of the limiting factors of the long term operational stability of simplified PHOLEDs. The effect of optical excitation on the ITO/organic interface stability in hole-only devices was investigated. It was found that the ITO/organic interface is susceptible to exciton-induced degradation. This degradation affects the device stability severely compared to current-induced degradation. The exciton-induced degradation can be prevented by doping the hole transport layer (HTL), at the interface with an exciton quencher layer or by blocking the electrons from leaking to the ITO/organic interface that may further recombine with holes to form excitons. Further studies showed that upon combining both electrical stress and optical excitation, the device degradation is even more pronounced which is most likely due to interactions between charges and excitons. By using exciton life-time measurements, a new role of molybdenum trioxide (MoO3) in the electrical stability of PHOLEDs, as an exciton quencher layer, is introduced. Delayed EL (DEL) measurements showed that the simplified PHOLEDs are susceptible to triplet-triplet annihilation (TTA) and triplet-polaron quenching (TPQ) which might affect the operational stability of simplified PHOLEDs. Finally, EML modifications showed that the recombination zone of simplified PHOLEDs is located near the HTL/EML interface.

Mina Abdelmalek (2013). Investigating the Factors Governing the Efficiency and the Electroluminescence Stability in Simplified Phosphorescent Organic Light-Emitting Devices Utilizing One Material for Both Hole Transport and Emitter Host. UWSpace. http://hdl.handle.net/10012/8080