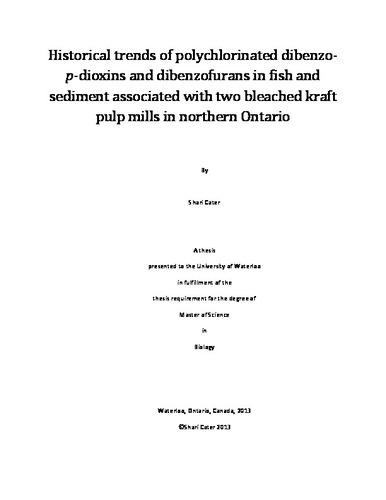 In the early 1990s polychlorinated dibenzo-p-dioxin (PCDD) and dibenzofuran (PCDF) contamination of fish was widely associated with bleached kraft pulp mills. Regulations were put into place in Canada and elsewhere to reduce or eliminate the presence of these chemicals in pulp mill effluents. The industry quickly introduced treatment and process changes such as elemental (ECF) and total chlorine free (TCF) bleaching, which resulted in dramatically reduced PCDD/F concentrations in pulp mill effluents. However, PCDD/Fs may remain a concern for the receiving environment near bleached kraft pulp mills due to their tendency to persist in sediments and bioaccumulate in aquatic biota. Several studies conducted in the early 1990s reported significantly elevated levels of PCDD/Fs in white sucker (Catostomus commersoni) exposed to bleached kraft mill effluent (BKME). Particularly high concentrations were observed in the receiving environment of two mills in northern Ontario. The first mill, located in the town of Terrace Bay, discharges effluent into Jackfish Bay, Lake Superior. The second mill is located in Smooth Rock Falls, Ontario and discharges effluent into the Mattagami River where effects have been observed in fish collected downstream of the pulp mill. Over time, both mills have undergone a number of process upgrades, including a transition to 100% chlorine dioxide (ClO2) substitution. In 2006 the Tembec Smooth Rock Falls Pulp and Paper Mill closed permanently, while the mill in Terrace Bay has gone through a number of temporary shutdowns and is currently in the process of transitioning to a dissolving pulp process. Temporal changes in PCDD/F contamination was examined in white sucker historically exposed to BKME in Jackfish Bay and the Mattagami River, following mill process changes and closures. Historical data was summarized from studies conducted in the 1990s and analyzed along with liver tissue of male white sucker collected from each location in 2011 and 2012. The body burden of each fish was analysed using Toxic Equivalency (TEQ) calculations to account for concentration and relative toxicity of 2,3,7,8– substituted PCDD/F congeners. At Jackfish Bay, concentrations of PCDD/Fs in surface sediment and dated sediment cores were used to document the spatial and temporal pattern of PCDD/F contamination in relation to historical process upgrades and operational changes at the mill. PCDD/Fs measured in white sucker liver samples collected from Jackfish Bay during gonadal recrudescence in the fall illustrate a decrease in mean TEQ from 74.2 ± 20.9 pg∙g-1 in 1991 to 3.34 ± 2.05 pg∙g-1 in 2012. These values were slightly elevated compared to the remote reference location at Mountain Bay, Lake Superior, which exhibited a mean TEQ of 1.88 ± 0.45 pg∙g-1 and 1.06 ± 0.69 pg∙g-1 in white sucker collected in fall 2011 and 2012, respectively. Although below consumption guidelines, trace levels of PCDD/Fs persist in fish collected from Jackfish Bay and these concentrations are suspected to reflect sediment contamination in Moberly Bay (part of Jackfish Bay). A unique PCDD/F contaminant profile, dominated by 2,3,7,8– tetrachlorodibenzo–p–dioxin (TCDD) and dibenzofuran (TCDF), was observed in white sucker and sediment collected from Jackfish Bay. Analysis of surface sediment collected throughout Jackfish Bay revealed elevated PCDD/F concentrations, compared to reference areas in Lake Superior. TEQ values measured in surface sediment from the depositional areas of Moberly Bay exceeded the Canadian Council of Ministers of the Environment (CCME) guidelines. In 1991 PCDD/F contamination, reported as mean TEQ, of white sucker collected downstream of the pulp mill outfall in Smooth Rock Falls reached levels of 111 ± 86.2 pg∙g-1. At the time, the mill utilized molecular chlorine (Cl2) in the bleaching sequence and employed primary effluent treatment. A dramatic decline was observed in PCDD/F concentrations of fish collected in 1993 and 1995, corresponding to implementation of 100% ClO2 substitution in the bleaching process. PCDD/F contamination in white sucker collected from the Mattagami River in 2011 and 2012 were similar upstream (0.53–1.49 pg TEQ∙g-1) and downstream (0.75–2.87 pg TEQ∙g-1) of the historical pulp mill outfall at Smooth Rock Falls, suggesting a return to background condition following the 2006 mill closure. Levels of 2,3,7,8–TCDD and 2,3,7,8–TCDF in liver tissue of fish collected downstream declined drastically compared to concentrations measured in 1991. The PCDD/F congener profile observed in white sucker downstream in 2011 and 2012 was more similar to fish collected from the reference site upstream than exposed fish collected in 1991. No sediment depositional areas suitable for taking a core sample were found on the river downstream of Smooth Rock Falls due to the nature of the system. This study supports the conclusion that particulate (POM) and dissolved organic matter (DOM) from continuous inputs of effluent were likely the primary source of PCDD/Fs to fish in these receiving environments, with only a small contribution from surface sediment. Results indicate a decreasing trend in PCDD/F contamination of white sucker historically exposed to bleached kraft pulp mill effluent in the receiving environments of Jackfish Bay and the Mattagami River, consistent with mill process upgrades to eliminate the use of elemental chlorine from the bleaching sequence. Current levels of PCDD/Fs measured in white sucker collected from these locations suggest a return to background condition.