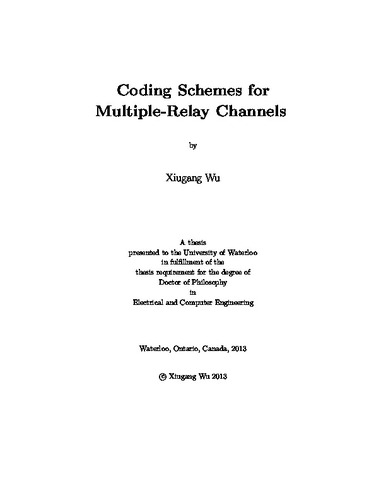 In network information theory, the relay channel models a communication scenario where there is one or more relay nodes that can help the information transmission between the source and the destination. Although the capacity of the relay channel is still unknown even in the single-relay case, two fundamentally different relay schemes have been developed by (Cover and El Gamal, 1979) for such channels, which, depending on whether the relay decodes the information or not, are generally known as Decode-and-Forward (D-F) and Compress-and-Forward (C-F). In the D-F relay scheme, the relay first decodes the message sent by the source and then forwards it to the destination, and the destination decodes the message taking into account the inputs of both the source and the relay. In contrast, the C-F relay scheme is used when the relay cannot decode the message sent by the source, but still can help by compressing its observation into some compressed version, and forwarding this compression into the destination; the destination then either successively or jointly decodes the compression of the relay's observation and the original message of the source. For the single-relay case, it is known that joint compression-message decoding, although providing more freedom in choosing the compression at the relay, cannot achieve higher rates for the original message than successive decoding. This thesis addresses some fundamental issues in generalizing and unifying the above D-F and C-F relay schemes to the multiple-relay case. We first generalize the C-F scheme to multiple-relay channels, and investigate the question of whether compression-message joint decoding can improve the achievable rate compared to successive decoding in the multiple-relay case. It is demonstrated that in the case of multiple relays, there is no improvement on the achievable rate by joint decoding either. More interestingly, it is discovered that any compressions not supporting successive decoding will actually lead to strictly lower achievable rates for the original message. Therefore, to maximize the achievable rate for the original message, the compressions should always be chosen to support successive decoding. Furthermore, it is shown that any compressions not completely decodable even with joint decoding will not provide any contribution to the decoding of the original message. We also develop a new C-F relay scheme with block-by-block backward decoding. This new scheme improves the original C-F relay scheme to achieve higher rates in the multiple-relay case as the recently proposed noisy network coding scheme. However, compared to noisy network coding which uses repetitive encoding/all blocks united decoding, our new coding scheme is not only simpler, but also reveals the essential reason for the improvement of the achievable rate, that is, delayed decoding until all the blocks have been finished. Finally, to allow each relay node the freedom of choosing either the D-F or C-F relay strategy, we propose a unified relay framework, where both the D-F and C-F strategies can be employed simultaneously in the network. This framework employs nested blocks combined with backward decoding to allow for the full incorporation of the best known D-F and C-F relay strategies. The achievable rates under our unified relay framework are found to combine both the best known D-F and C-F achievable rates and include them as special cases. It is also demonstrated through a Gaussian network example that our achievable rates are generally better than the rates obtained with existing unified schemes and with D-F or C-F alone.