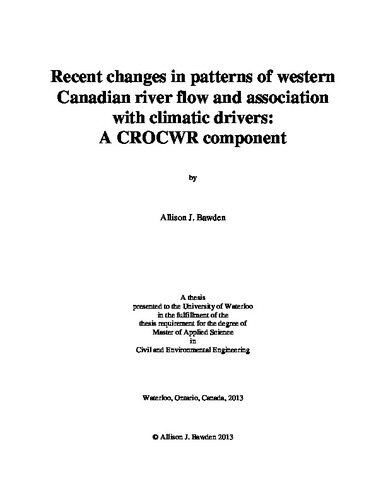 Climatic variability and change can have profound impacts on the hydrologic regime of a watershed, especially in regions that are particularly sensitive to changes in climate, such as the northern latitudes and alpine-fed regions of western Canada. Quantifying historical spatial and temporal changes in hydrological data can provide useful information as to how water resources are affected by climate, as well as create an understanding of potential future variability in the hydrologic regime of a region. The CROCWR (Climatic Redistribution of Canadian Water Resources) project was established to quantify changes in western Canadian water resources under past, present, and future climate through spatio-temporal analyses of runoff and its driving climatic and atmospheric forcings. This research involved the examination of trends in western Canadian annual and seasonal streamflow volume and timing for the periods of 1976-2010 and 1966-2010. Runoff was found to have increased significantly in the most northern watersheds studied, while mid-latitude water availability has decreased considerably. In addition, the onset of the spring freshet has shifted toward earlier timing in the North and along the Pacific coast, associated with increased freshet length and flow volume, while contrasting later freshets have occurred in the mid-latitudes, causing decreased warm season river flows in this region. Application of a Principal Component Analysis revealed coherent hydrological variability in each of the northern, mid-latitude, and southern regions of the study area, with consistent increasing and decreasing trends in river flows for the north and mid-latitudes, respectively. The results of this analysis suggest a northward shift in water from adjacent more southerly western Canadian watersheds. Lower- and mid-latitude runoff was shown to be positively correlated with precipitation both annually and during the warm season, while the effect of temperature was found to be associated with the timing of the spring freshet in the North and along the west coast. River flows in some watersheds were shown to be influenced by the effects of the Pacific Decadal Oscillation and/or the Pacific North American low-frequency climate patterns, however, the overall influence of these natural oscillations on western Canadian streamflow was not determined to be indicative of overall trend results. The results of this analysis will provide water resource managers with an indication of the direction and magnitude of changing water availability in western and northern Canada.