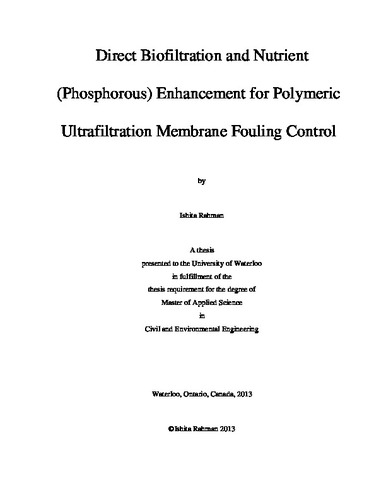 Membrane filtration is growing in popularity as a viable technology for drinking water treatment to meet high demand and regulatory requirements. While many improvements have been made to the technology in the past decade, fouling continues to be one of the major operational challenges associated with membranes as it increases operating costs and reduces membrane life. Fouling control typically requires some form of pre-treatment. Biofiltration is a “green” technique that can minimize chemical usage and waste during water treatment and is a relatively new application as a pre-treatment for membranes. Proteins and polysaccharides (biopolymers) have been found to contribute most to fouling of low pressure polymeric membranes. Biofiltration has recently been demonstrated as an effective pre-treatment method for reducing biopolymer-associated fouling of this type of membrane (Hallé et al., 2009). Given that the concentration and composition of organic matter in water is variable, there is an opportunity to explore the applicability of this robust technology for different water types. The primary goals of this research were to assess the effectiveness of direct biofiltration in minimizing ultrafiltration polymeric (PVDF) membrane fouling and at the same time evaluate the biofilter development, biofilter performance based on organics removal potential, and the effect of phosphorus addition (as a nutrient) to the biofilter influent. A pilot-scale treatment train was constructed at the Technology Demonstration Facility at the Walkerton Clean Water Centre. It included two parallel dual media (sand/anthracite) biological filters (preceded by roughing filters), followed by an ultrafiltration membrane unit. Experiments were conducted using water from the Saugeen River (Ontario, Canada) whose primary form of carbon is humic material. The biofilters were allowed to acclimate and biofilter performance and organics removal were tested over a fourteen month period, the last four months of which were dedicated to phosphorus enhancement experiments. The membrane fouling experiments started seven months following the start-up of the biofilters, after confirmation of steady-state operation. Biofilter water samples were analyzed for natural organic matter constituents along with other water quality parameters, and biomass quantity and activity in the media were measured. Biomass activity in the biofilter media and biopolymer removal through the biofilter indicated a rapid acclimation period, and also demonstrated similar performance of the parallel biofilters during start-up and steady-state operation. The biofilters achieved 21% removal of the biopolymers on average following acclimation, while reduction of the humic fractions was not observed. A linear relationship between biopolymer removal and its concentration in the river water was observed (first-order process). Membrane fouling experiments were conducted using both untreated and biofiltered river water. The fouling rates were computed by monitoring changes in transmembrane pressure over time. Analysis of the samples with liquid chromatography-organic carbon detection confirmed the significant contribution of biopolymers to irreversible and reversible membrane fouling rates even when only present at low concentrations. During the phosphorus enhancement phase, two different phosphorus doses were fed into the influent of one of the parallel biofilters in order to achieve a target C:N:P ratio of roughly 100:10:1. Although initially (first month of the dosing period) an increase in the removal of dissolved organic carbon and ultraviolet-absorbance was observed in the phosphorus-enhanced biofilter, this was not sustained. Phosphorus addition did not affect biopolymer removal or biomass quantity and activity in the biofilter, and the membrane fouling experiments during this period did not show any significant effect of phosphorus addition.