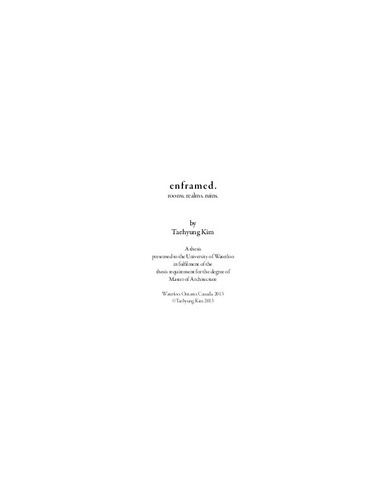 Contemporary architectural discourse commonly invokes the term framing.  Derivative phrases contrived in education and practise are seemingly inexhaustible: framing the view, framing space, framing an idea, frame of reference, framework, window frame, body frame, space frame.  The polymorphic nature of the term is perplexing, and despite its frequent and casual mention, the rich potential of framing in the architectural design process is often overlooked.    Framing is a primal phenomenon. It shapes an essential spatial experience with the power to divide, connect, fuse, reveal and conceal entities literally or notionally. In the simple but profound act of recognizing, entering and exiting the boundary between, for example, an interior and an exterior, framing emerges in all its architectural and emotional significance. The experience of the frame is both intimate and metaphysical, hinting at shared but intangible dimensions of architecture. Through essays, drawings, installations, lists, poems, collages, and other architectural media, this thesis presents a body of twelve investigations that seek to elicit the broader notion behind the complex and transformative nature of framing in today’s parlance of architecture. To clarify, organize and interconnect the experiences of framing, the thesis constructs a theoretical framework on which to base further reflection, study, design and construction.