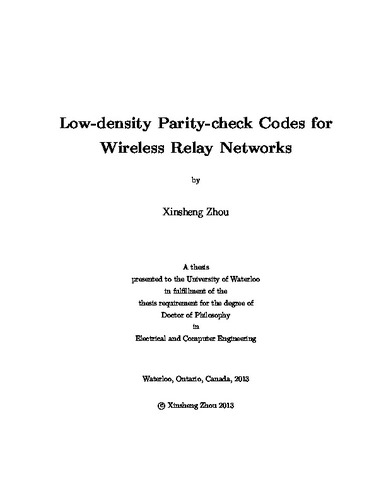 In wireless networks, it has always been a challenge to satisfy high traffic throughput demands, due to limited spectrum resources. In past decades, various techniques, including cooperative communications, have been developed to achieve higher communication rates. This thesis addresses the challenges imposed by cooperative wireless networks, in particular focusing on practical code constructions and designs for wireless relay networks. The thesis is divided into the following four topics: 1) constructing and designing low-density parity-check (LDPC) codes for half-duplex three-phase two-way relay channels, 2) extending LDPC code constructions to half-duplex three-way relay channels, 3) proposing maximum-rate relay selection algorithms and LDPC code constructions for the broadcast problem in wireless relay networks, and 4) proposing an iterative hard interference cancellation decoder for LDPC codes in 2-user multiple-access channels. Under the first topic, we construct codes for half-duplex three-phase two-way relay channels where two terminal nodes exchange information with the help of a relay node. Constructing codes for such channels is challenging, especially when messages are encoded into multiple streams and a destination node receives signals from multiple nodes. We first prove an achievable rate region by random coding. Next, a systematic LDPC code is constructed at the relay node where relay bits are generated from two source codewords. At the terminal nodes, messages are decoded from signals of the source node and the relay node. To analyze the performance of the codes, discretized density evolution is derived. Based on the discretized density evolution, degree distributions are optimized by iterative linear programming in three steps. The optimized codes obtained are 26% longer than the theoretic ones. For the second topic, we extend LDPC code constructions from half-duplex three-phase two-way relay channels to half-duplex three-way relay channels. An achievable rate region of half-duplex three-way relay channels is first proved. Next, LDPC codes for each sub-region of the achievable rate region are constructed, where relay bits can be generated only from a received codeword or from both the source codeword and received codewords. Under the third topic, we study relay selection and code constructions for the broadcast problem in wireless relay networks. We start with the system model, followed by a theorem stating that a node can decode a message by jointly decoding multiple blocks of received signals. Next, the maximum rate is given when a message is decoded hop-by-hop or decoded by a set of nodes in a transmission phase. Furthermore, optimal relay selection algorithms are proposed for the two relay schemes. Finally, LDPC codes are constructed for the broadcast problem in wireless relay networks. For the fourth topic, an iterative hard interference cancellation decoder for LDPC codes in 2-user multiple-access channels is proposed. The decoder is based on log-likelihood ratios (LLRs). Interference is estimated, quantized and subtracted from channel outputs. To analyze the codes, density evolution is derived. We show that the required signal-to-noise ratio (SNR) for the proposed low-complexity decoder is 0.2 dB higher than that for an existing sub-optimal belief propagation decoder at code rate 1/3.