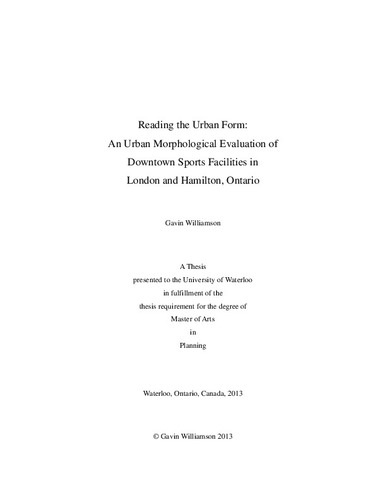 Over the past few decades, the issue of downtown revitalization has been a priority for planners and civic leaders. One strategy of attracting people, jobs and investment to the downtown is by constructing a catalytic facility that facilitates further growth, of which the sports stadium is “by far” the most prevalent example (Coates and Humphreys, 2011; p.5). However, the outcome of downtown stadium development has been inconsistent in cities across North America. The purpose of this thesis is to determine whether the built urban form impacts the outcome of downtown sports arenas and whether it contributes to civic image. An urban morphological analysis is conducted in order to evaluate the outcome of two multi-purpose sports arenas: Budweiser Gardens in London, ON and Copps Coliseum in Hamilton, ON. The analysis traces the evolution of both cities’ downtown urban form over time, identifying patterns to development by categorizing the townscape into three elements: the town plan unit (consisting of the street pattern, lot pattern and building pattern), the building fabric and land use. The urban morphological analysis was undertaken utilizing fire insurance maps, tax assessments and planning documents. In addition, a questionnaire was distributed to 200 residents of both case cities in order to gauge each facility's contribution to civic image. The results show that Budweiser Gardens has emerged as the more successful facility, namely due to two factors: (a) the arena is sited close to the central business district, in an area where the historical townscape has been preserved to a greater extent; and (b) because the unique design of the facility (which incorporates a replica of a historic building into the contemporary development) contributes to a higher degree of civic image than Copps Coliseum, which lacks both historic and current place references. The ultimate conclusion of this thesis is that urban morphological analyses should be incorporated into urban plans, so that the siting of future projects can be improved in order for cities to accrue the maximum benefits and return-on-investment.