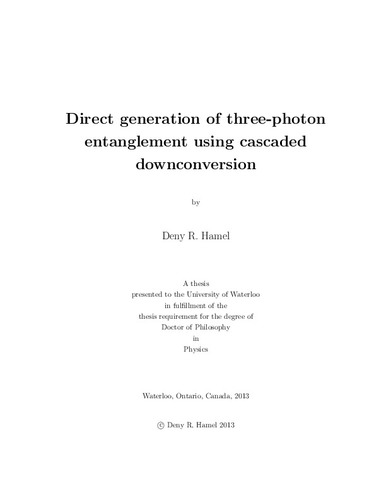 High quality entangled photon sources are a key requirement for many promising quantum optical technologies. However, the production of multi-photon entangled states with good fidelity is challenging. Current sources of multi-photon entanglement require the use of post-selection, which limits their usefulness for some applications. It has been an open challenge to create a source capable of directly producing three-photon entanglement. An important step in this direction was achieved with the demonstration of photon triplets produced by a new process called cascaded downconversion, but these previous measurements were not sufficient to show whether these photons were in an entangled state and only had detection rates of five triplets per hour. In this thesis, we show the first demonstration of a direct source of three-photon entanglement. Our source is based on cascaded downconversion, and we verify that it produces genuine tripartite entanglement in two degrees of freedom: energy-time and polarization. The energy-time entanglement is similar to a three-particle generalization of an Einstein-Podolski-Rosen state; the three photons are created simultaneously, yet the sum of their energies is well defined, which is an indication of energy-time entanglement. To prove it, we use time-bandwidth inequalities which check for genuine tripartite entanglement. Our measurements show that the state violates the inequalities with what constitute, to the best of our knowledge, the strongest violation of time-bandwidth inequalities in a tripartite continuous-variable system to date. We create polarization entanglement by modifying our experimental setup so that two downconversion processes producing orthogonally polarized triplets interfere to create Greenberger-Horne-Zeilinger states. By using highly efficient superconducting nanowire single photon detectors, we improve the detected triplet rate by 2 orders of magnitude to 660 triplets per hour. We characterize the state using quantum state tomography, and find a fidelity of 86\% with the ideal state, beating the previous best value for a three-photon entangled state fidelity measured by tomography. We also use the state to perform two tests of local realism. We violate the Mermin and Svetlichny inequalities by 10 and 5 standard deviations respectively, the latter being the strongest violation to date. Finally, we show that, unlike previous sources of tree-photon entanglement, our source can be used as a source of heralded Bell pairs. We demonstrate this by measuring a CHSH inequality with the heralded Bell pairs, and by reconstructing their state using quantum state tomography.