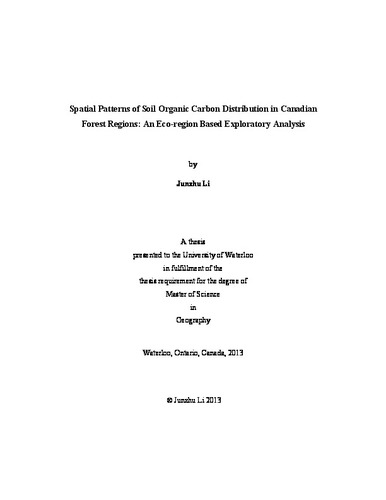 As the largest carbon reservoir in ecosystems, soil accounts for more than twice as much carbon storage as that of vegetation biomass or the atmosphere. The goal of this study is to examine spatial patterns of soil organic carbon (SOC) in Canadian forest area at an eco-region scale and to explore its relationship with different ecological variables. In this study, the first Canadian forest soil database published in 1997 by the Canada Forest Service was analyzed along with other long-term eco-climatic data (1961 to 1991) including precipitation, air temperature, Normalized Difference Vegetation Index (NDVI), slope, aspect, and elevation. Additionally, an eco-region framework established by the Environment Canada was adopted in this study for SOC distribution assessment. Exploratory spatial data analysis techniques, with an emphasis on spatial autocorrelation analysis, were employed to explore how forest SOC was spatially distributed in Canada. Correlation analysis and spatial regression analysis were applied to determine the most dominant ecological factors influencing SOC distribution in different eco-regions. At the national scale, a spatial error model was built up to adjust for spatial effects and to estimate SOC patterns based on ecological and ecosystem property factors. Using the significant variables derived in the spatial error model, a predictive SOC map in Canadian forest area was generated. Findings from this study suggest that high SOC clusters tend to occur in coastal areas, while low SOC clusters occur in western boreal eco-region. In Canadian forest area, SOC patterns are strongly related to precipitation regimes. Although overall SOC distribution is influenced by both climatic and topographic variables, distribution patterns are shown to differ significantly among eco-regions, thus verifying the eco-region classification framework for SOC zonation mapping in Canada.