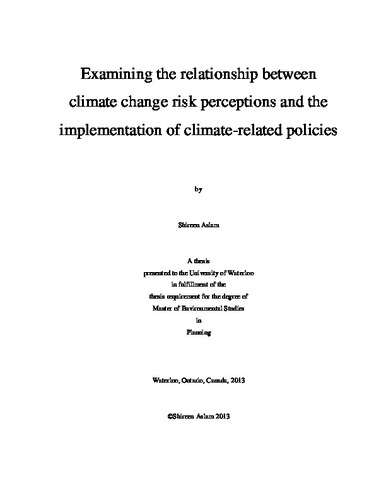 Climate change is a global problem that will have local impacts on regions and municipalities. Many parts of Canada are already experiencing severe weather events such as extreme levels of rainfall, severe flooding, and increased frequency of storms. Local planning officials have the capacity to respond to climate change through mitigation and adaptation strategies, but before asking the question of whether any action is being taken on the local level, there needs to be an understanding of how local planning officials view climate change and whether the issue reaches policy attention. For the general public, literature tells us that most people perceive climate change to be a temporally and geographically distant issue. This absence of personal relevance renders that people fail to take responsive action. Some authors have also noted that there is an absence of municipal action on climate change because it is also not viewed as a local concern. At the same time, climate change is but one of the many issues that municipal councils must consider and address on a daily basis, often leaving the matter to be pushed aside, in place of other more pressing issues. The main objectives of this thesis were to understand how local planning officials view climate change, assess whether climate change is recognized as an issue requiring policy attention, and perform a policy review to assess the current state of local action in the Regional Municipality of Waterloo. In total, 21 professionals working in the Region took part in the study, and came from a diverse range of backgrounds including planning, environment, emergency management, public health and economic development, among others. With respect to the main research question, ‘what is the relationship between climate change risk perceptions and implementation of climate-related policies’, this study found there to be four guiding frameworks. These were 1) the need for collaboration: perceptions indicated a need, while policy demonstrated feasibility; 2) the need for leadership: perceptions suggested that leadership is critical, but somewhat limited in practice, while policy suggested it already exists; 3) the need for integration of climate change in the planning context and other planning issues: perceptions suggested disconnect, while policy also suggested disconnect; and 4) the need for presenting climate change as a local issue: perceptions demonstrated a need, while policy can provide the supporting document.