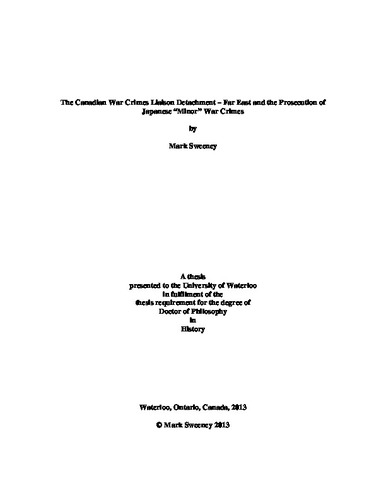 The members of the Canadian War Crimes Liaison Detachment – Far East travelled across the Pacific in April 1946 to participate in “minor” war crimes trials in Hong Kong and Japan. The assignment stemmed from the harrowing experiences of the Winnipeg Grenadiers and Royal Rifles of Canada in Hong Kong and Japan following the Japanese invasion in December 1941 through to their liberation from POW camps at the end of the Pacific War. Literature pertaining to war crimes trials during this period focuses primarily on the Nuremberg and other European trials, or on the major, often politicized Tokyo Trial. This dissertation addresses the frequently proffered recommendation in the literature that further explorations into the “minor” trials of 5600 Japanese war criminals are needed. The members of the Canadian Detachment served as prosecutors at the American operated Yokohama War Crimes Trials, as well as the British Hong Kong War Crimes Courts. Their cases covered the entirety of the POW experience, from atrocities during battle and in the immediate aftermath, to brutal abuses and medical neglect in POW camps and exploitation in war-related and dangerous labour. The Canadian trials were steeped in emerging and evolving legal concepts including issues of command responsibility and superior orders, as well as the use of common or joint trials and broadly expanded rules of evidence. The uncertainty of trial outcomes and the leniency of many of the sentences combined with the genuine effort extended by the Canadian Detachment members in investigation, case development, and in the courtroom belie the crude and misguided application of a victors’ justice framework. Although the trials were not marked with a clear sense of unfairness, their historical legacy has ultimately been a failure. When the international community sought answers to war crimes starting in the latter half of the twentieth century, these trial records have been left to gather dust on archive shelves. However, the transcripts offer historians the opportunity to better understand both the brutality and banality of the POW experience, and the legal community a series of pragmatic and thorough avenues for addressing violations of the laws and customs of war.