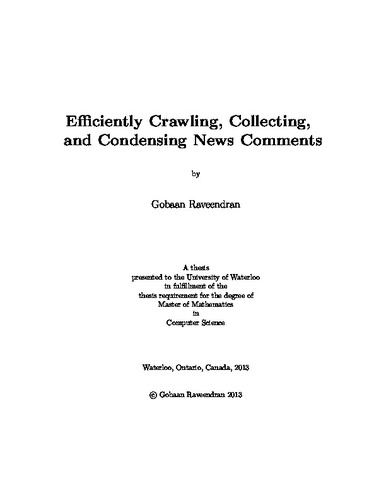 Traditionally, public opinion and policy is decided by issuing surveys and performing censuses designed to measure what the public thinks about a certain topic. Within the past five years social networks such as Facebook and Twitter have gained traction for collection of public opinion about current events. Academic research on Facebook data proves difficult since the platform is generally closed. Twitter on the other hand restricts the conversation of its users making it difficult to extract large scale concepts from the microblogging infrastructure. News comments provide a rich source of discourse from individuals who are passionate about an issue. Furthermore, due to the overhead of commenting, the population of commenters is necessarily biased towards individual who have either strong opinions of a topic or in depth knowledge of the given issue. Furthermore, their comments are often a collection of insight derived from reading multiple articles on any given topic. Unfortunately the commenting systems employed by news companies are not implemented by a single entity, and are often stored and generated using AJAX, which causes traditional crawlers to ignore them. To make matters worse they are often noisy; containing spam, poor grammar, and excessive typos. Furthermore, due to the anonymity of comment systems, conversations can often be derailed by malicious users or inherent biases in the commenters. In this thesis we discuss the design and creation of a crawler designed to extract comments from domains across the internet. For practical purposes we create a semiautomatic parser generator and describe how our system attempts to employ user feedback to predict which remote procedure calls are used to load comments. By reducing comment systems into remote procedure calls, we simplify the internet into a much simpler space, where we can focus on the data, almost independently from its presentation. Thus we are able to quickly create high fidelity parsers to extract comments from a web page. Once we have our system, we show the usefulness by attempting to extract meaningful opinions from the large collections we collect. Unfortunately doing so in real time is shown to foil traditional summarization systems, which are designed to handle dozens of well formed documents. In attempting to solve this problem we create a new algorithm, KLSum+, that outperforms all its competitors in efficiency while generally scoring well against the ROUGE SU4 metric. This algorithm factors in background models to boost accuracy, but performs over 50 times faster than alternatives. Furthermore, using the summaries we see that the data collected can provide useful insight into public opinion and even provide the key points of discourse.