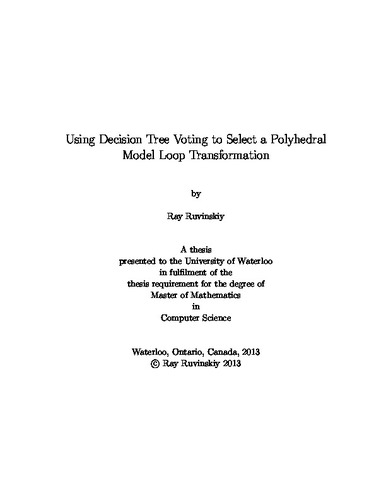 Algorithms in fields like image manipulation, sound and signal processing, and statistics frequently employ tight loops. These loops are computationally intensive and CPU-bound, making their performance highly dependent on efficient utilization of the CPU pipeline and memory bus. Recent years have seen CPU pipelines becoming more and more complicated, with features such as branch prediction and speculative execution. At the same time, clock speeds have stopped their prior exponential growth rate due to heat dissipation issues, and multiple cores have become prevalent. These developments have made it more difficult for developers to reason about how their code executes on the CPU, which in turn makes it difficult to write performant code. An automated method to take code and optimize it for most efficient execution would, therefore, be desirable. The Polyhedral Model allows the generation of alternative transformations for a loop nest that are semantically equivalent to the original. The transformations vary the degree of loop tiling, loop fusion, loop unrolling, parallelism, and vectorization. However, selecting the transformation that would most efficiently utilize the architecture remains challenging. Previous work utilizes regression models to select a transformation, using as features hardware performance counter values collected during a sample run of the program being optimized. Due to inaccuracies in the resulting regression model, the transformation selected by the model as the best transformation often yields unsatisfactory performance. As a result, previous work resorts to using a five-shot technique, which entails running the top five transformations suggested by the model and selecting the best one based on their actual runtime. However, for long-running benchmarks, five runs may be take an excessive amount of time. I present a variation on the previous approach which does not need to resort to the five-shot selection process to achieve performance comparable to the best five-shot results reported in previous work. With the transformations in the search space ranked in reverse runtime order, the transformation selected by my classifier is, on average, in the 86th percentile. There are several key contributing factors to the performance improvements attained by my method: formulating the problem as a classification problem rather than a regression problem, using static features in addition to dynamic performance counter features, performing feature selection, and using ensemble methods to boost the performance of the classifier. Decision trees are constructed from pairs of features (performance counters and structural features than can be determined statically from the source code). The trees are then evaluated according to the number of benchmarks for which they select a transformation that performs better than two baseline variants, the original program and the expected runtime if a randomly selected transformation were applied. The top 20 trees vote to select a final transformation.