Selenate Reduction by Granular Iron and the Associated Isotope Fractionation 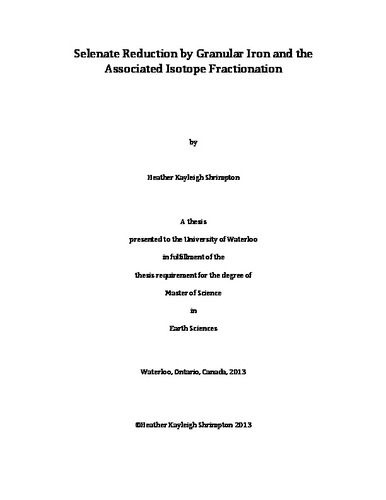 Research in selenium isotopes has been gaining interest as new contaminated sites are identified around the world. Selenium is an emerging contaminant, as it is increasingly being released through anthropogenic activities. It is an element with a very narrow range between nutrient requirement and toxic concentrations. Increased concentrations in the environment are a cause for concern. Selenium can be made less toxic in a system through reduction. Currently, investigations into fractionation caused by the reduction of Se by Fe and Fe minerals are limited. This thesis describes a batch study conducted using granular iron to treat Se(VI) in CaCO3 saturated water, under anaerobic conditions. The amount of Se(VI) in solution decreased to 14.5% of the initial concentration within three days. No quantifiable Se(IV) was found in solution. Analysis of the solid phase showed Se(IV), ferric selenite, FeSe, and Se(0) on the GI. The mass of Se0 on the GI increased over time. Iron selenide compounds became more prevalent after two days had elapsed. Effective fractionations of 4.3‰ for 82/76Se and 3.0‰ for 82/78Se were observed for this reaction. These effective fractionations are lower than fractionations observed in other experiments for reduction in solution. This discrepancy may be due to the reduction of Se(IV) occurring after adsorbing onto the solid phase, rather than reduction taking place only in solution.