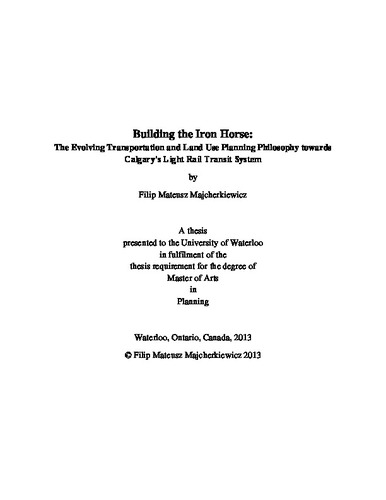 Many cities today are contemplating major investments in rail transit systems, especially Light Rail Transit (LRT), to address two significant planning issues which have characterized North American metropolitan growth patterns: increasing automobile use and decentralizing population and employment. Proponents of these systems argue that by building rail transit, travel behaviour and land use patterns can be changed. The experience in cities which have built these systems is mixed, but transportation and land use outcomes typically go hand-in-hand: San Diego, Denver, and Portland have increased transit ridership and intensification in station areas, whereas Buffalo and Cleveland have had minimal change occur as a result of investments in LRT. Calgary, Alberta presents an interesting case as its LRT system, first opened in 1981, generates tremendous ridership but has had relatively modest land use change in station areas. This thesis aims to understand why intensification has been so marginal at many stations, and to uncover what are the unique facets of Calgary’s experience which shaped this outcome. The approach taken is to examine the evolution of the City of Calgary’s planning philosophy towards transportation and land use since the need for rapid transit was first identified in 1966. This evolution is also placed within the context of the particularly severe cyclical economic forces that influenced both the city’s growth and policy planning approaches taken to manage this growth. The research finds that the combination of transportation and land use policy, in conjunction with market forces, which existed during the design, construction and operation of the first three LRT lines favoured intensification in Calgary’s downtown and low-density decentralization in suburban areas. However, the evolution of planning policy and market forces indicate that this less likely to be true in the future, both in the near and long term. The City is transitioning from a highly centralized mono-centric city to a poly-centric and increasingly multi-modal metropolitan region. The LRT, and other transit service, will be a key means of facilitating and managing this transformation.