Modeling and Analysis of Software Product Line Variability in Clafer 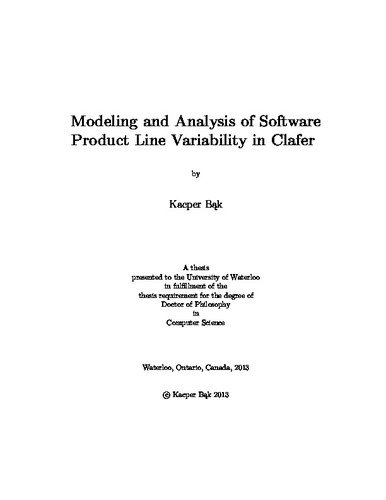 Both feature and class modeling are used in Software Product Line (SPL) engineering to model variability. Feature models are used primarily to represent user-visible characteristics (i.e., features) of products; whereas class models are often used to model types of components and connectors in a product-line architecture. Previous works have explored the approach of using a single language to express both configurations of features and components. Their goal was to simplify the definition and analysis of feature-to-component mappings and to allow modeling component options as features. A prominent example of this approach is cardinality-based feature modeling, which extends feature models with multiple instantiation and references to express component-like, replicated features. Another example is to support feature modeling in a class modeling language, such as UML or MOF, using their profiling mechanisms and a stylized use of composition. Both examples have notable drawbacks: cardinality-based feature modeling lacks a constraint language and a well-defined semantics; encoding feature models as class models and their evolution bring extra complexity. This dissertation presents Clafer (class, feature, reference), a class modeling language with first-class support for feature modeling. Clafer can express rich structural models augmented with complex constraints, i.e., domain, variability, component models, and meta-models. Clafer supports: (i) class-based meta-models, (ii) object models (with uncertainty, if needed), (iii) feature models with attributes and multiple instantiation, (iv) configurations of feature models, (v) mixtures of meta- and feature models and model templates, and (vi) first-order logic constraints. Clafer also makes it possible to arrange models into multiple specialization and extension layers via constraints and inheritance. On the other hand, in designing Clafer we wanted to create a language that builds upon as few concepts as possible, and is easy to learn. The language is supported by tools for SPL verification and optimization. We propose to unify basic modeling constructs into a single concept, called clafer. In other words, Clafer is not a hybrid language. We identify several key mechanisms allowing a class modeling language to express feature models concisely. We provide Clafer with a formal semantics built in a novel, structurally explicit way. As Clafer subsumes cardinality-based feature modeling with attributes, references, and constraints, we are the first to precisely define semantics of such models. We also explore the notion of partial instantiation that allows for modeling with uncertainty and variability. We show that Object-Oriented Modeling (OOM) languages with no direct support for partial instances can support them via class modeling, using subclassing and strengthening multiplicity constraints. We make the encoding of partial instances via subclassing precise and general. Clafer uses this encoding and pushes the idea even further: it provides a syntactic unification of types and (partial) instances via subclassing and redefinition. We evaluate Clafer analytically and experimentally. The analytical evaluation shows that Clafer can concisely express feature and meta-models via a uniform syntax and unified semantics. The experimental evaluation shows that: 1) Clafer can express a variety of realistic rich structural models with complex constraints, such as variability models, meta-models, model templates, and domain models; and 2) that useful analyses can be performed within seconds.