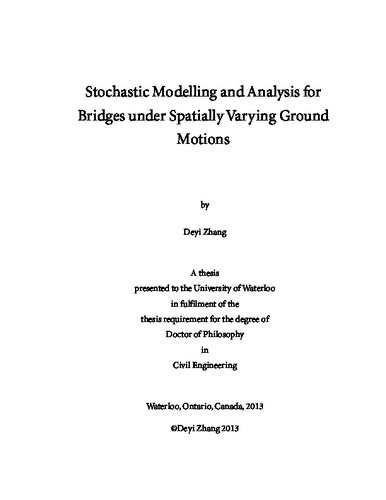 Earthquake is undoubtedly one of the greatest natural disasters that can induce serious structural damage and huge losses of properties and lives. The resulting destructive consequences not only have made structural seismic analysis and design much more important but have impelled the necessity of more realistic representation of ground motions, such as inclusion of ground motion spatial variations in earthquake modelling and seismic analysis and design of structures. Recorded seismic ground motions exhibit spatial variations in their amplitudes and phases, and the spatial variabilities have an important effect on the responses of structures extended in space, such as long span bridges. Because of the multi-parametric nature and the complexity of the problems, the development of specific design provisions on spatial variabilities of ground motions in modern seismic codes has been impeded. Eurocode 8 is currently the only seismic standard worldwide that gives a set of detailed guidelines to explicitly tackle spatial variabilities of ground motions in bridge design, providing both a simplified design scheme and an analytical approach. However, there is gap between the code-specified provisions in Eurocode 8 and the realistic representation of spatially varying ground motions (SVGM) and the corresponding stochastic vibration analysis (SVA) approaches. This study is devoted to bridge this gap on modelling of SVGM and development of SVA approaches for structures extended in space under SVGM. A complete and realistic SVGM representation approach is developed by accounting for the incoherence effect, wave-passage effect, site-response effect, ground motion nonstationarity, tridirectionality, and spectra-compatibility. This effort brings together various aspects regarding rational seismic scenarios determination, comprehensive methods of accounting for varying site effects, conditional modelling of SVGM nonstationarity, and code-specified ground motion spectra-compatibility. A comprehensive, systematic, and efficient SVA methodology is derived for long span structures under tridirectional nonstationary SVGM. An absolute-response-oriented scheme of pseudo-excitation method and an improved high precision direct integration method are proposed to reduce the enormous computational effort of conventional nonstationary SVA. A scheme accounting for tridirectional varying site-response effect is incorporated in the nonstationary SVA scheme systematically. The proposed highly efficient and accurate SVA approach is implemented and verified in a general finite element analysis platform to make it readily applicable in SVA of complex structures. Based on the proposed SVA approach, parametric studies of two practical long span bridges under SVGM are conducted. To account for spatial randomness and variability of soil properties in soil-structure interaction analysis of structures under SVGM, a meshfree-Galerkin approach is proposed within the Karhunen-Loeve expansion scheme for representation of spatial soil properties modelled as a random field. The meshfree shape functions are proposed as a set of basis functions in the Galerkin scheme to solve integral equation of Karhunen-Loeve expansion, with a proposed optimization scheme in treating the compatibility between the target and analytical covariance models. The accuracy and validity of the meshfree-Galerkin scheme are assessed and demonstrated by representation of covariance models for various homogeneous and nonhomogeneous spatial fields. The developed modelling approaches of SVGM and the derived analytical SVA approaches can be applied to provide more refined solutions for quantitatively assessing code-specified design provisions and developing new design provisions. The proposed meshfree-Galerkin approach can be used to account for spatial randomness and variability of soil properties in soil-structure interaction analysis.