Control of Hysteresis in the Landau-Lifshitz Equation 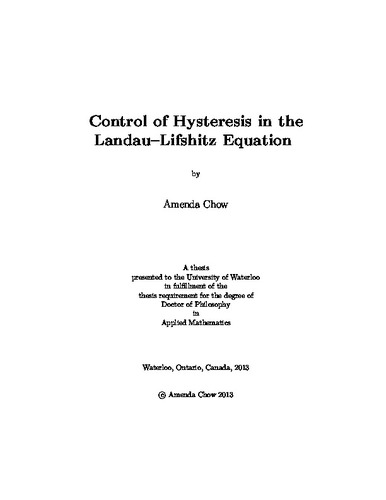 There are two main tools for determining the stability of nonlinear partial differential equations (PDEs): Lyapunov Theory and linearization. The former has the advantage of providing stability results for nonlinear equations directly, while the latter considers the stability of linear equations and then further justification is needed to show the linear stability implies local stability of the nonlinear equation. Linearization has the advantage of investigating stability on a simpler equation; however, the justification can be difficult to prove. Both Lyapunov Theory and linearization are applied to the Landau--Lifshitz equation, a nonlinear PDE that describes the behaviour of magnetization inside a magnetic object. It is known that the Landau-Lifshitz equation has an infinite number of stable equilibrium points. We present a control that forces the system from one equilibrium to another. This is proved using Lyapunov Theory. The linear Landau--Lifshitz equation is also investigated because it provides insight to the nonlinear equation. The linear model is shown to be well--posed and its eigenvalue problem is solved. The resulting eigenvalues suggest an appropriate control for the nonlinear Landau--Lifshitz equation. Mathematically, the control causes the initial equilibrium to no longer be an equilibrium and the second point to be an asymptotically stable equilibrium point. This implies the magnetization has moved to the second equilibrium and hence the control objective is successfully achieved. The existence of multiple stable equilibria is closely related to hysteresis. This is a phenomenon that is often characterized by a looping behaviour; however, the existence of a loop is not sufficient to identify hysteretic systems. A more precise definition is required, which is presented, and applied to the Landau--Lifshitz equation (both linear and nonlinear) to establish the presence of hysteresis.