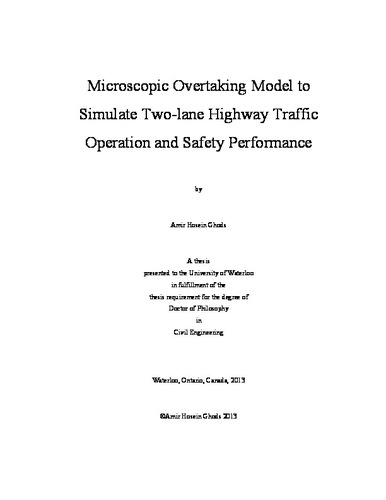 Rural two-lane highways make up a large portion of road networks around the world. The special geometric and traffic attributes of these highways pose special challenges to safety and traffic operation. In recent years, microscopic simulation models have gained increased acceptance as a reliable tool for investigating traffic operations and evaluating safety performance. Despite this trend, the development and application of these models to two-lane highway operations has not kept pace with those of freeways and urban networks, and this is due, in large part, to difficulties in modeling the overtaking process. This process has been rendered complex by the large number of inter-related decision factors that need to be considered by the overtaking driver in a bi-directional driving regime. In this research, a new overtaking gap-acceptance model is developed to simulate traffic operation and safety performance on two-lane highways. This model considers a wide spectrum of physical and behavioral variables that could affect overtaking. It does so by introducing a new safety-based gap-acceptance decision variable based on the overtaking driver’s perception of time-to-collision (TTC) with an opposing vehicle. The decision to overtake was expressed as a function of the perceived TTC in comparison to an established driver risk threshold (critical TTC). The distribution of critical TTC among drivers are determined through a model calibration and validation procedure based on overtaking observational data obtained from a video-recording of a one-kilometer segment of a two-lane highway. Unlike previous models, the proposed gap-acceptance model makes use of only a few calibration parameters. The proposed overtaking models along with other components of a micro-simulation traffic model are implemented in a software framework that can simulate traffic and safety operation for two-lane highways. The overall simulation results demonstrate that the proposed simulation model can provide reliable measures of traffic and safety for two-lane highway operation. The overtaking model was found to yield both consistent and transferable results. The model is then applied successfully to provide more accurate estimates of traffic measures used in level-of-service analysis for two-lane highways and to compare these results to values reported in the two versions of the Highway Capacity Manual (HCM). In another application, this model is used to investigate the impact of truck mandated speed limiters on safety and traffic operation of two-lane highways and specifically their impact on overtaking. Finally, the potential implications of adaptive cruise control for overtaking and its resultant traffic and safety impacts are studied using the developed simulation model.