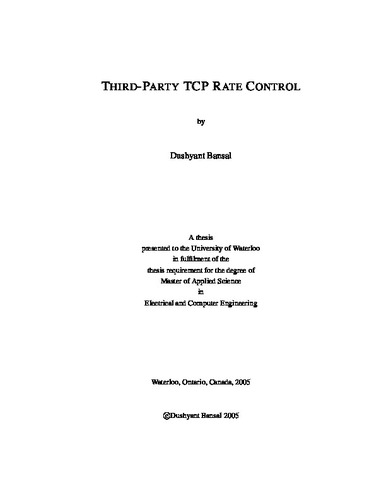 The Transmission Control Protocol (TCP) is the dominant transport protocol in today?s Internet. The original design of TCP left congestion control open to future designers. Short of implementing changes to the TCP stack on the end-nodes themselves, Internet Service Providers have employed several techniques to be able to operate their network equipment efficiently. These techniques amount to shaping traffic to reduce cost and improve overall customer satisfaction. <br /><br /> The method that gives maximum control when performing traffic shaping is using an inline traffic shaper. An inline traffic shaper sits in the middle of any flow, allowing packets to pass through it and, with policy-limited freedom, inspects and modifies all packets as it pleases. However, a number of practical issues such as hardware reliability or ISP policy, may prevent such a solution from being employed. For example, an ISP that does not fully trust the quality of the traffic shaper would not want such a product to be placed in-line with its equipment, as it places a significant threat to its business. What is required in such cases is third-party rate control. <br /><br /> Formally defined, a third-party rate controller is one that can see all traffic and inject new traffic into the network, but cannot remove or modify existing network packets. Given these restrictions, we present and study a technique to control TCP flows, namely triple-ACK duplication. The triple-ACK algorithm allows significant capabilities to a third-party traffic shaper. We provide an analytical justification for why this technique works under ideal conditions and demonstrate via simulation the bandwidth reduction achieved. When judiciously applied, the triple-ACK duplication technique produces minimal badput, while producing significant reductions in bandwidth consumption under ideal conditions. Based on a brief study, we show that our algorithm is able to selectively throttle one flow while allowing another to gain in bandwidth.