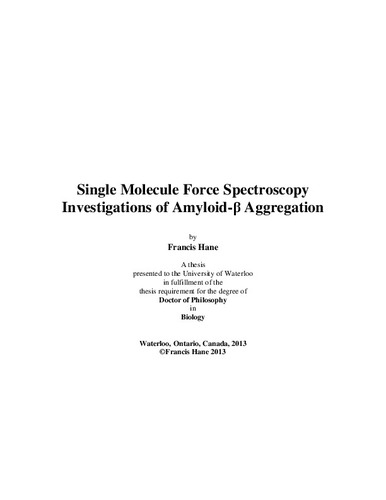 Alzheimer’s Disease is a neurodegenerative disease affecting over five million people in the United States alone, with almost half a million new cases every year. As the population ages, these figures will only increase unless an effective treatment can be found. Amyloid-β is the protein implicated in, and believed to be causal to Alzheimer’s Disease. Amyloid-β has been known to misfold into β-sheets and aggregate into neurotoxic oligomers or relatively inert amyloid fibrils. A variety of aggravating factors have been implicated including an excess of metal ions, various genetic anomalies, and the intracellular depositions of neurofibrillatory tangles (NFT). This PhD thesis advances the understanding of Alzheimer’s disease by demonstrating how the presence of copper ions influences the unbinding force of two amyloid-β peptides affecting the initial aggregation pathway by increasing the force between two amyloid-β peptides. The results provide evidence to the hypothesis that the addition of metals increases the amyloid oligomer content in the brain beyond that which the brain can naturally clear. Current Alzheimer’s pharmacological research is focused on developing amyloid aggregation inhibitors that would slow down the accumulation of amyloid oligomers and thereby slow the onset of Alzheimer’s symptoms. A high throughput method of testing potential aggregation inhibitors that is far more efficient than current testing methods is demonstrated. An aggregation inhibitor was tested that functions by inhibiting the initial self-dimerization of amyloid-β preventing further aggregation. The results show that this inhibitor, named SG1, greatly reduces the experimental yield (a parameter calculated during force spectroscopy experiments) of the force experiments demonstrating a drastically lower amyloid-amyloid affinity. The natural conclusion to these results is that if amyloid-β cannot dimerize, it cannot continue to aggregate. Using dynamic force spectroscopy, the height and width of the energy barrier of amyloid-β dimerization is calculated using a variety of different models. These different models are compared and their relative advantages and disadvantages discussed.