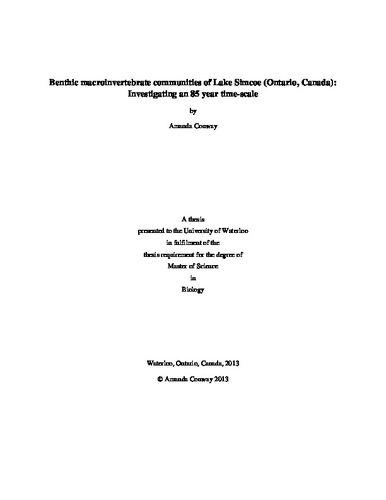 Lake Simcoe is the largest inland waterbody in southern Ontario and has been the focus of much scientific study over the past 30 years. Increases in phosphorus loading over the past century have impacted algae and aquatic plant biomass, deepwater anoxia, and the sustainability of the coldwater fishery. Management efforts have been made to restore Lake Simcoe to an ecologically sustainable state, but colonization by invasive species, climate change, and the rapid urbanization of the basin continue to complicate management strategies. Benthic macroinvertebrate communities can be used to investigate both historic and present-day ecological change in Lake Simcoe and the first comprehensive benthic survey was carried out by Rawson in 1926. I replicated this study in 2011 by sampling the same sites in a similar time period in order to quantitatively and qualitatively assess change in the benthos of Lake Simcoe. Total invertebrate abundance was 15 times greater in 2011 across all sites, with all major benthic taxa significantly increasing in abundance since 1926 with the exception of Sphaeriidae. Chironomidae was the dominant taxon in 1926 and 2011, representing 51% and 33% of total invertebrate abundance, respectively. Community structure at sites was driven by depth in 2011, with shallow sites dominated by amphipods, isopods, and Dreissena being separate from deep sites. Community structure at sites in 1926 was influenced primarily by site density. Major taxonomic changes include the presence of Dreissena and absence of Chaoborus in 2011, and the complete absence of Hirudinea in 1926. The increases in phosphorus loading since 1926 along with the influence of Dreissena is likely shaping the qualitative and quantitative changes observed in 2011. By routinely investigating benthic communities in Lake Simcoe along these sites, long-term research can continue to track historic changes in the benthos and provide a baseline for future monitoring.