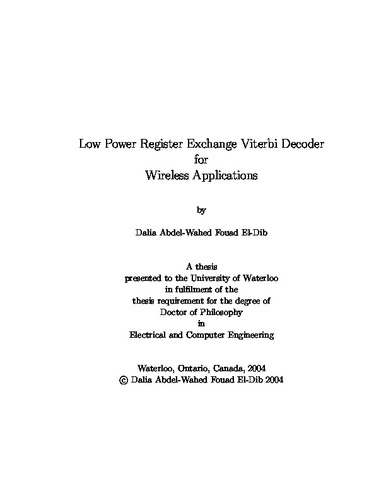 Since the invention of wireless telegraphy by Marconi in 1897, wireless technology has not only been enhanced, but also has become an integral part of our everyday lives. The first wireless mobile phone appeared around 1980. It was based on first generation analog technology that involved the use of Frequency Division Multiple Access (FDMA) techniques. Ten years later, second generation (2G) mobiles were dependent on Time Division Multiple Access (TDMA) techniques and Code Division Multiple Access (CDMA) techniques. Nowadays, third generation (3G) mobile systems depend on CDMA techniques to satisfy the need for faster, and more capacious data transmission in mobile wireless networks. Wideband CDMA (WCDMA) has become the major 3G air interface in the world. WCDMA employs convolutional encoding to encode voice and MPEG4 applications in the baseband transmitter at a maximum frequency of 2<i>Mbps</i>. To decode convolutional codes, Andrew Viterbi invented the Viterbi Decoder (VD) in 1967. In 2G mobile terminals, the VD consumes approximately one third of the power consumption of a baseband mobile transceiver. Thus, in 3G mobile systems, it is essential to reduce the power consumption of the VD. Conceptually, the Register Exchange (RE) method is simpler and faster than the Trace Back (TB) method for implementing the VD. However, in the RE method, each bit in the memory must be read and rewritten for each bit of information that is decoded. Therefore, the RE method is not appropriate for decoders with long constraint lengths. Although researchers have focused on implementing and optimizing the TB method, the RE method is focused on and modified in this thesis to reduce the RE method's power consumption. This thesis proposes a novel modified RE method by adopting a <i>pointer</i> concept for implementing the survivor memory unit (SMU) of the VD. A pointer is assigned to each register or memory location. The contents of thepointer which points to one register is altered to point to a second register, instead of copying the contents of the first register to the second. When the pointer concept is applied to the RE's SMU implementation (modified RE), there is no need to copy the contents of the SMU and rewrite them, but one row of memory is still needed for each state of the VD. Thus, the VDs in CDMA systems require 256 rows of memory. Applying the pointer concept reduces the VD's power consumption by 20 percent as estimated by the VHDL synthesis tool and by the new power reduction estimation that is introduced in this work. The coding gain for the modified RE method is 2. 6<i>dB</i> at an SNR of approximately 10-3. Furthermore, a novel zero-memory implementation for the modified RE method is proposed. If the initial state of the convolutional encoder is known, the entire SMU of the modified RE VD is reduced to only one row. Because the decoded data is generated in the required order, even this row of memory is dispensable. The zero-memory architecture is called the MemoryLess Viterbi Decoder (MLVD), and reduces the power consumption by approximately 50 percent. A prototype of the MLVD with a one third convolutional code rate and a constraint length of nine is mapped into a Xilinx 2V6000 chip, operating at 25 <i>MHz</i> with a decoding throughput of more than 3<i>Mbps</i> and a latency of two data bits. The other problem of the VD which is addressed in this thesis is the Add Compare Select Unit (ACSU) which is composed of 128 butterfly ACS modules. The ACSU's high parallelism has been previously solved by using a bit serial implementation. The 8-bit First Input First Output (FIFO) register, needed for the storage of each path metric (PM), is at the heart of the single bit serial ACS butterfly module. A new, simply controlled shift register is designed at the circuit level and integrated into the ACS module. A chip for the new module is also fabricated.