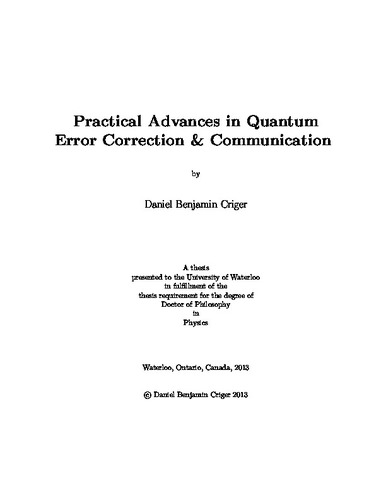 Quantum computing exists at the intersection of mathematics, physics, chemistry, and engineering; the main goal of quantum computing is the creation of devices and algorithms which use the properties of quantum mechanics to store, manipulate and measure information. There exist many families of algorithms, which, using non-classical logical operations, can outperform traditional, classical algorithms in terms of memory and processing requirements. In addition, quantum computing devices are fundamentally smaller than classical processors and memory elements; since the physical models governing their performance are applicable on all scales, as opposed to classical logic elements, whose underlying principles rely on the macroscopic nature of the device in question. Quantum algorithms, for the most part, are predicated on a theory of resources. It is often assumed that quantum computers can be placed in a precise fiducial state prior to computation, and that logical operations are perfect, inducing no error on the system which they affect. These assumptions greatly simplify algorithmic design, but are fundamentally unrealistic. In order to justify their use, it is necessary to develop a framework for using a large number of imperfect devices to simulate the action of a perfect device, with some acceptable probability of failure. This is the study of fault-tolerant quantum computing. In order to pursue this study effectively, it is necessary to understand the fundamental nature of generic quantum states and operations, as well as the means by which one can correct quantum errors. Additionally, it is important to attempt to minimize the use of computational resources in achieving error reduction and fault-tolerant computing. This thesis is concerned with three projects related to the use of error-prone quantum systems to transmit and manipulate information. The first of these is concerned with the use of imperfectly-prepared states in error-correction routines. Using optimal quantum error correction, we are able to deduce a method of partially protecting encoded quantum information against preparation errors prior to encoding, using no additional qubits. The second of these projects details the search for entangled states which can be used to transmit classical information over quantum channels at a rate superior to classical states. The third of these projects concerns the transcoding of data from one quantum code into another using few ancillary resources. The descriptions of these projects are preceded by a brief introduction to representations of quantum states and channels, for completeness. Three techniques of general interest are presented in appendices. The first is an introduction to, and a minor advance in the development of optimal error correction codes. The second is a more efficient means of calculating the action of a quantum channel on a given state, given that the channel acts non-trivially only on a subsystem, rather than the entire system. Finally, we include documentation on a software package developed to aid the search for quantum transcoding operations.