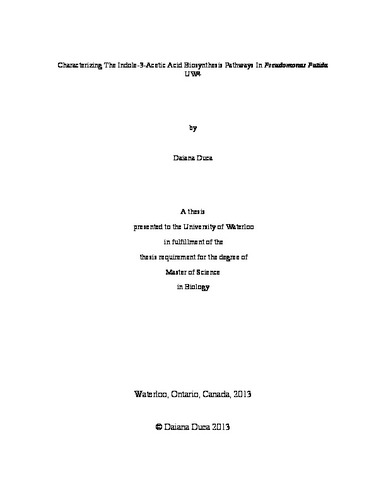 Plant growth-promoting bacteria employ a variety of biochemical and genetic strategies to facilitate plant growth. One of the most prominent and important of these mechanisms is the production of the plant hormone indole-3-acetic acid. Pseudomonas putida UW4 is a rhizospheric plant-growth-promoting bacterium that has the ability to produce IAA. The sequencing of this bacterium’s genome allowed for the identification of seven separate genes that encode enzymes potentially involved in the biosynthesis of IAA. These seven genes appear to be part of at least three different IAA biosynthesis pathways. We sought to better understand the IAA biosynthesis pathways operating in Pseudomonas putida UW4 by isolating, purifying and characterizing some of the implicated enzymes. The focus was on two particular enzymes, nitrilase and nitrile hydratase which participate in the indole-3-acetonitrile pathway. Substrate feeding assays revealed the role of each enzyme. The pH and temperature profiles of both enzymes were determined in order to better understand the catalytic activity and give insight into how these enzymes may be regulated. Multiple sequence alignments and phylogenetic trees were constructed to infer the phylogeny of these putative IAA-enzymes.