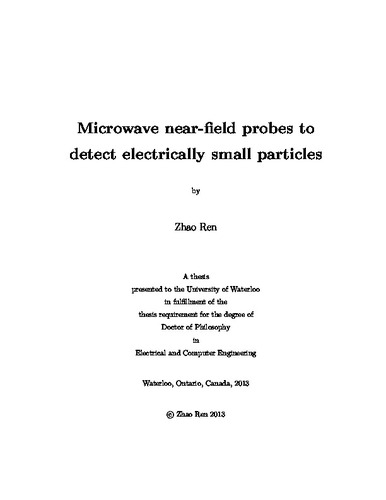 Microwave near-field probes (MNPs) confine evanescent fields to regions that are substantially smaller than the wavelength at the operation frequency. Such probes are able to resolve subwavelength features, thus providing resolution much higher than the classical Abbé limit. These abilities of MNPs are primarily due to the evanescent nature of the field generated at the tip of the probes. In the past, MNPs with ultra-high resolution were designed by tapering a resonant opening to provide high field concentration and high sensitivity. The limitations of these MNPs were subject to low surface roughness and practical realization challenges due to their geometrical features and vibration control constraints. Metamaterials with their ability to enhance evanescent fields, lead to the speculation that they could potentially increase the sensitivity of near-field probe. Periodically arranged metamaterial unit elements such as split-ring-resonators (SRRs) can create negative permeability media. Placing such material layer in the proximity of a probe leads to enhancement of the evanescent waves. Guided by this remarkable feature of metamaterials, I proposed an MNP consisting of a wire loop concentric with a single SRR. The evanescent field behavior of the probe is analyzed using Fourier analysis revealing substantial enhancement of the evanescent field consistent with metamaterial theory predictions. The resolution of the probe is studied to especially determine its ability for sub-surface detection of media buried in biological tissues. The underlying physics governing the probe is analyzed. Variations of the probe are developed by placement of lumped impedance loads. To further increase the field confinement to smaller region, a miniaturized probe design is proposed. This new probe consists of two printed loops whose resonance is tunable by a capacitor loaded in the inner loop. The sensing region is decreased from λ/20 to λ/55, where λ is the wavelength of the probe’s unloaded frequency. The magnetic-sensitive nature of the new probe makes it suitable for sensing localized magnetostatic surface resonance (LMSR) occurring in electrically very small particles. Therefore, I proposed a sensing methodology for detecting localized magnetostatic surface (LMS) resonant particles. In this methodology, an LMS resonant sphere is placed concentrically with the loops. A circuit model is developed to predict the performance of the probe in the presence of a magnetic sphere having Lorentz dispersion. Full-wave simulations are carried out to verify the circuit model predictions, and preliminary experimental results are demonstrated. The Lorentzian fit in this work implies that the physical nature of LMSR may originate from spin movement of charged particle whose contribution to effective permeability may be analogous to that of bound electron movement to effective permittivity in electrostatic resonance. Detection of LMSR can have strong impact on marker-based sensing applications in biomedicine and bioengineering.