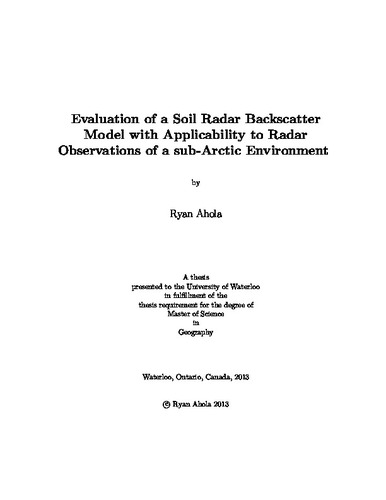 This research explores the applicability of a soil backscatter model for estimating X-band (9.35-9.85 GHz) backscatter from snow covered sub-Arctic terrain in the Hudson Bay Lowlands, Manitoba, Canada. The studied radar frequencies and model have been identified for potential use within Snow Water Equivalent (SWE) retrievals for future remote sensing missions. In open tundra environments, the predominant X-band response is controlled by soil frozen status, soil moisture and soil surface roughness. Snow in these environments is expected to have little influence on backscatter due to the transparent nature of shallow snowpacks at this frequency. Therefore, understanding a backscatter model's sensitivity to soil parameters is of primary concern for appropriate use under sub-Arctic terrain conditions. Using measurements and estimates of soil complex relative permittivity as well as a series of soil surface roughness measurements, backscatter model estimates are compared with two X-band remote sensing datasets: 1) ground-based scatterometer measurements obtained by the University of Waterloo Scatterometer (UW-Scat), and 2) TerraSAR-X observations. Comparisons reveal mixed agreement between remote sensing measurements and backscatter model estimates, with average differences ranging from -0.76 to 11.43 dB. While TerraSAR-X VV measurements and in situ soil surface roughness observations contributed to the range of differences, overall agreement was typically ˜6 dB, indicating poor agreement for the majority of backscatter model, UW-Scat and TerraSAR-X comparisons. These results thus illustrate substantial challenges for application of the backscatter model within dual-frequency SWE retrieval frameworks, without proper incorporation of roughness, soil moisture and permittivity for the areas under observation. Results from this study reveal uncertainties in the applicability of the soil backscatter model for sub-Arctic terrain of the Hudson Bay Lowlands. While good agreement was observed for TerraSAR-X VV measurements, poor and varied agreement for the remaining ground and satellite-based measurements suggests the current modelling framework needs improvement for use in sub-Arctic terrain. By improving the characterization of the Hudson Bay Lowlands region, a better understanding of the nature of sub-Arctic terrain parameters required for this application can be achieved. This may also lead to improved modelling frameworks for representing sub-Arctic terrain within future satellite missions.

Ryan Ahola (2013). Evaluation of a Soil Radar Backscatter Model with Applicability to Radar Observations of a sub-Arctic Environment. UWSpace. http://hdl.handle.net/10012/8000