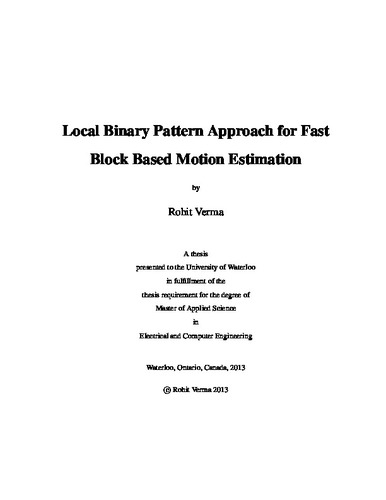 With the rapid growth of video services on smartphones such as video conferencing, video telephone and WebTV, implementation of video compression on mobile terminal becomes extremely important. However, the low computation capability of mobile devices becomes a bottleneck which calls for low complexity techniques for video coding. This work presents two set of algorithms for reducing the complexity of motion estimation. Binary motion estimation techniques using one-bit and two-bit transforms reduce the computational complexity of matching error criterion, however sometimes generate inaccurate motion vectors. The first set includes two neighborhood matching based algorithms which attempt to reduce computations to only a fraction of other methods. Simulation results demonstrate that full search local binary pattern (FS-LBP) algorithm reconstruct visually more accurate frames compared to full search algorithm (FSA). Its reduced complexity LBP (RC-LBP) version decreases computations significantly to only a fraction of the other methods while maintaining acceptable performance. The second set introduces edge detection approach for partial distortion elimination based on binary patterns. Spiral partial distortion elimination (SpiralPDE) has been proposed in literature which matches the pixel-to-pixel distortion in a predefined manner. Since, the contribution of all the pixels to the distortion function is different, therefore, it is important to analyze and extract these cardinal pixels. The proposed algorithms are called lossless fast full search partial distortion elimination ME based on local binary patterns (PLBP) and lossy edge-detection pixel decimation technique based on local binary patterns (ELBP). PLBP reduces the matching complexity by matching more contributable pixels early by identifying the most diverse pixels in a local neighborhood. ELBP captures the most representative pixels in a block in order of contribution to the distortion function by evaluating whether the individual pixels belong to the edge or background. Experimental results demonstrate substantial reduction in computational complexity of ELBP with only a marginal loss in prediction quality.