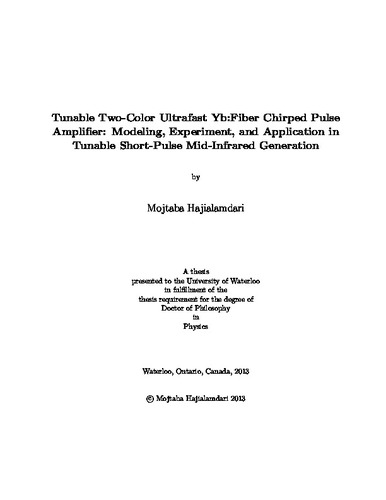 In this thesis, I have developed a tunable two-color two-stage ultrafast Yb:fiber chirped pulse amplifier for the generation of short-pulse mid-infrared (MIR) radiation in the long-wavelength side of the "molecular fingerprint" (2.5-25 μm) using difference frequency generation (DFG) technique. The two colors called blue and red are in the wavelengths 1.03-1.11 μm and are amplified simultaneously in the same Yb-doped fiber amplifier (YDFA) stages in order to reduce the induced environmental noise on the phase difference of the pulses and to minimize the complexity and system cost. I will present numerical simulations on the two-stage YDFA system to amplify a two-color spectrum in the wavelengths 1.03-1.11 μm. The first and second YDFA called preamplifier and main amplifier are single-clad, single-mode and double-clad, single-mode YDFA respectively. From numerical simulations, the optimal length of the preamplifier to have equal power at two colors centered at 1043 nm and 1105 nm are in agreement with experimental results. It is well known that the power of MIR radiation generated by difference frequency mixing of two wavelengths scales up with the product of mixing powers in a fixed-field approximation. Furthermore, for the gain narrowing effect on the short-wavelength side of the YDFA gain profile, the spectral bandwidth of the blue color decreases resulting in pulse broadening. In addition, for the two colors separated largely, the amplified spontaneous emission is intensified. Considering the cited factors, I will present the modeling results on the two-color, two-stage YDFA system that the product of the power of the two colors is maximized for a maximized wavelength separation between the two mixing colors and a minimized gain narrowing on the blue color in order to build an as broadly tunable and powerful as possible ultrafast mid-infrared source by difference frequency mixing of the two colors. In this research, I achieved a wavelength separation as broad as 71 nm between pulses centered at 1038 nm and 1109 nm from the two-color ultrafast YDFA system. I achieved combined average powers of 2.7 W just after the main amplifier and 1.5 W after compressing the two-color pulses centered at 1041 nm and 1103 nm to nearly Fourier transform limited pulses. From autocorrelation measurements, the full width at half maximum (FWHM) of the compressed two-color pulses with the peak wavelengths of 1041 nm and 1103 nm was ~500 fs. By mixing the tunable two-color pulses in a 1-mm-thick GaSe crystal using DFG technique, I achieved tunable short-pulse MIR radiation. In this research, I achieved short-pulse MIR radiation tunable in the wavelengths 16-20 μm. The MIR tuning range from the lower side was limited to the 16 μm because of the 71-nm limitation on the two-color separation and from the upper side was limited to the 20 μm because of the 20-μm cutoff absorption wavelength of GaSe. Based on measured MIR spectra, the MIR pulses have a picosecond pulse duration in the wavelengths 16-20 μm. The FWHM of measured spectra of the MIR pulses increases from 0.3 μm to 0.8 μm as the MIR wavelength increases from 16 μm to 20 μm. According to Fourier transform theory, the FWHM of the MIR spectra corresponds to the bandwidth of picosecond MIR pulses assuming that the MIR pulses are perfectly Fourier-transform-limited Gaussian pulses. In this research, I achieved a maximum average power of 1.5 mW on short-pulse MIR radiation at the wavelength 18.5 μm corresponding to the difference frequency of the 500-fs two-color pulses with the peak wavelengths of 1041 nm and 1103 nm and average powers of 1350 mW and 80 mW respectively. Considering the gain bandwidth, Ti:sapphire is a main competitor to the YDFA to be used in the two-color ultrafast laser systems. In the past, the broad gain bandwidth of Ti:sapphire crystal has resulted in synchronized two-color pulses with a wavelength separation up to 120 nm. Apart from its bulkiness and high cost, Ti:sapphire laser system is limited to a watt-level output average power at room temperature mainly due to Kerr lensing problem that occurs at high pumping powers. In comparison, YDFA as a laser amplifier has a narrower gain bandwidth but it is superior in terms of average power. Optical parametric generation (OPG) and optical parametric amplification (OPA) techniques are two competitors to DFG technique for the generation of short-pulse long-wavelength MIR radiation. Although OPG offers a tunability range as broad as DFG, the MIR output power is lower because of the absence of input signal pulses. From the OPA technique, the tunability range is not as broad as the DFG technique due to limitations with the spectral bandwidth of the optical elements. Currently, quantum cascade lasers (QCLs) are the state-of-art MIR laser sources. At the present time, the tunability range of a single MIR QCL is not as abroad as that achieved from the DFG technique. More, mode-locked MIR QCLs are not abundant mainly because of the fast gain recovery time. Thus, the generation of widely tunable short-pulse MIR radiation from DFG technique such as that developed in this thesis remains as a persistent technological solution. The application of the system developed in this thesis is twofold: on one hand, the tunable two-color ultrashort pulses will find applications for example in pump-probe ultrafast spectroscopy, short-pulse MIR generation, and optical frequency combs generation. On the other hand, the short-pulse MIR radiation will find applications for example in time-resolved MIR spectroscopy to study dynamical behavior of large molecules such as organic and biological molecules.