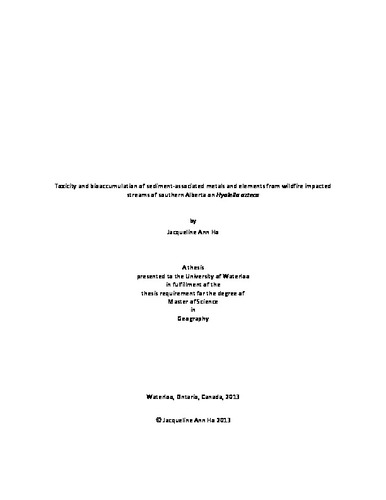 There is increasing global recognition of the effects of large scale land disturbance by wildfire on a wide range of water and ecosystem services. In 2003, the Lost Creek wildfire burned a contiguous area of 21,000 ha on the eastern slopes of the Rocky Mountains in southern Alberta. This disturbance had a significant and prolonged impact on the water quantity and quality of downstream river reaches and reservoirs in the Oldman watershed. Previous research in this watershed demonstrates that dissolved metal concentrations in rivers draining burned landscapes were 2 to 15 times greater than in unburned reference streams (Silins et al. 2009a). Currently there is no information on the effects of wildfire on the bioaccumulation and toxicity of sediment-associated metals in fire-impacted streams in Alberta. This study was designed to evaluate the linear downstream disturbance effects of wildfire in the Crowsnest River located in southern Alberta. The toxicity and bioaccumulation of particulate-associated metals from wildfire impacted tributaries to the Crowsnest River on freshwater amphipod Hyalella azteca were evaluated. Phillips samplers were deployed to collect suspended solids in streams draining burned zone impacted by the Lost Creek wildfire and reference (unburned) zones within the area. Metal toxicity and bioaccumulation were determined in the laboratory by exposing the epi-benthic freshwater amphipod Hyalella azteca to particulates collected from the Crowsnest River. A metal effects addition model (MEAM) was used to assess the impact of metal mixtures and to predict chronic mortality (Norwood et al. 2013). Increased concentrations of Al, Ba, Co, Cr, Mn and Zn were found in the tissues of H. azteca exposed to particulates from burned watersheds in comparison to the unburned watersheds. H. azteca mean survival was similar when exposed to the particulates samples from both burned and unburned sites indicating that 9 years after this landscape disturbance, there was little impact due to the wildfire. However, at burned site (B1), the observed survival was lower than survival predicted by MEAM. The data suggests that factors other than the metals examined in this study were influencing the survival of H. azteca. The concentrations of sediment-associated metals have decreased in the nine years since the wildfire, and minimal metal toxicity was observed in H. azteca. Although metal toxicity in H. azteca was minimal 9 years after the Lost Creek Fire, the short term effects of wildfire on metal toxicity remain largely unknown. In addition, other factors such as burn severity, stream size and hydroclimatic conditions can influence the effects of wildfire on abundance and diversity of aquatic invertebrates (Minshall et al. 2001). Therefore, the influences of those factors on metal toxicity as a result of wildfire should be rigorously assessed in future studies.