Advances in Biamperometry with Applications in Ocular Toxicology 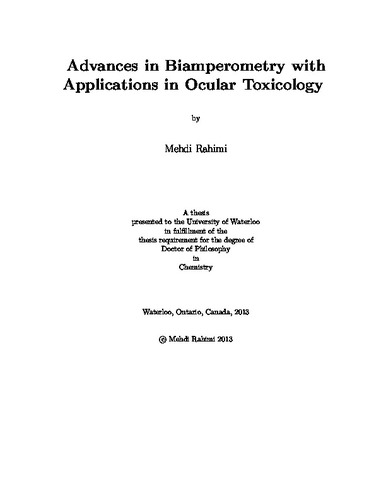 This thesis presents advances in biamperometry, together with applications cyclic biamperometry, in in vitro ocular cytotoxicity assessment. For the cytotoxicity/viability assessment, cultured human corneal epithelial cells have been used as a model. The assay involves electrochemical measurement of the respiratory activity of the cells, and relating the extent of cell respiration to cell viability. This measurement is done by capturing electrons from the components of the respiratory chain and transferring these electrons to a non-native terminal recipient. In this study, three lipophilic redox mediators, including 2,6-dichlorophenolindophenol,menadione (vitamin K3) and N,N,N',N'-tetramethyl-p-phenylenediamine were evaluated. The mediators were compared with each other under their optimal conditions and 2,6- dichlorophenolindophenol was selected for further studies. To demonstrate the cytotoxicity assessment, three well-characterized toxicants, including benzalkonium chloride, sodium dodecylsulfate, and hydrogen peroxide, were used and it has been shown that the electrochemical assay is able to detect the cytotoxicity of the test chemicals near their cytotoxicity threshold reported in the literature. In addition, culturing human corneal epithelial cells on growth inserts, in an attempt to construct 3D corneal tissues to be used in ocular cytotoxicity assessment, is discussed. Diff erential pulse biamperometry is also introduced. This electrochemical method involves application of diff erential pulse waveforms in the biamperometric electrochemical cells. Various parameters aff ecting the response of the method as well as potential applications for future studies are discussed.