The Effects of Chemical and Physical Pressure on Heavy Atom Radicals 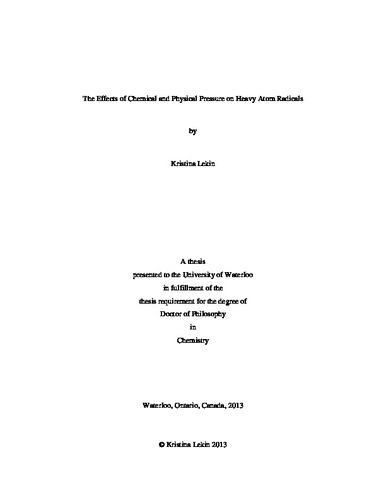 Neutral radicals have been pursued as building blocks for conductive and magnetic materials for several decades. Carbon-based materials are typically plagued by dimerization and quenching of spins, but the incorporation of heteroatoms has led to many systems that remain open-shell. Radicals based on the thiazyl subunit, which are the subject of this thesis, have evolved through many generations. While the early frameworks possessed a very high onsite Coulomb repulsion energy, U, which caused the spins to be localized so that the radicals were trapped in Mott insulating ground states, the development of resonance stabilized bisdithiazolyl radicals, and their selenazyl counterparts, has led to decreased values of U, in addition to inducing major improvements in the bandwidth, W. Variation in the ligand environment and selenium content can significantly change solid state packing and hence physical properties. This so-called effect of chemical pressure has been explored and structure-property correlations have been well established. In addition to studies involving the variation of chemical pressure, in this thesis the effect of physical pressure on these resonance stabilized heavy atom radicals is presented. In the radical building blocks of the present systems there are four possible combinations of sulfur and selenium atoms, sets of which constitute a family. The families may crystallize as an isostructural set in the solid state, but this is rare. Earlier work established that radicals in one isostructural family crystallize as undimerized π-radicals in the P4¯21m space group, the selenium variants of which all order magnetically. In this thesis, subtle molecular modification of this family is first explored. Exploration of the substituent effects with selenium fixed in the central position of the heterocycle has provided radicals that order as bulk ferromagnets in the range Tc = 9–12 K. The highest Tc ferromagnets in this group are those based on the all-selenium framework. The magnetic response of these radicals was studied under pressure, and it was discovered that with the initial application of pressure, Tc rises from 17–18 K to 21–24 K, before retreating upon further pressurization. In the 7–9 GPa range, the magnetic insulators begin to metallize, as evidenced by the loss in activation barrier to conductivity and a saturation of the resistance to a finite value at low temperature. The crystal structures in the entire pressure range have been determined and the changes in transport properties have been attributed to decreased slippage of the π-stacks with increasing pressure. Although most of the resonance stabilized bisdithiazolyl radicals and their selenium variants are undimerized in the solid state, a few derivatives exist that dimerize through unique 4-center 6-electron S•••E–E•••S σ-bonds. When E = Se, hypervalent σ-dimerization is especially prevalent. Under ambient conditions, these materials pack in crossbraced π-stacks and exhibit semiconducting behavior. Upon mild pressurization (P ≤ 5 GPa), however, conductivity increases 5–6 orders of magnitude and the activation energy decreases remarkably. Solid state structures have now been elucidated for these dimers under pressure. For two of the variants, including one (rare) E = S σ-dimer, increasing pressure results in simple contraction of the structure. This leads to enhanced orbital overlap and gradual coalescence of the valence and conduction bands, eventually leading to metallization at P > 13 GPa. This behavior is in sharp contrast to a previously reported σ-dimer, which undergoes a transition to a π-dimer at 5 GPa, the structure of which leads to abrupt closure of the HOMO-LUMO gap and, hence, the sudden onset of a weakly metallic state. As a departure from the behavior of any of the other known hypervalent σ-dimers, one bisdithiazolyl variant undergoes an abrupt S = 0 → S = ½ transition. This change can be initiated thermally, optically and with mild pressure. The thermal process, which is observed in the magnetic susceptibility measurements, is hysteretic, with T↑ = 380 K and T↓ = 375 K, giving rise to a small region of bistability. Irradiation results in the photomagnetization of the metastable S = ½ state that persists to an unprecedented relaxation temperature of 242 K. Under the influence of pressure, the same dimer-to-radical transition occurs (at room temperature) near 0.7 GPa. In all cases, the crystal structure of the metastable excited state has been determined by single crystal or powder X-ray diffraction. The novel behavior of the σ-dimer is in addition to the existence of a second polymorph of this material, which is paramagnetic and belongs to the P4¯21m space group under ambient conditions. Further exploration of the effects of chemical pressure on bisdithiazolyl radicals has led to new systems with extremely long alkyl chains. This was explored for the purpose of separating the plates to generate lower dimensional frameworks. The crystal structure of one derivative belongs to the familiar tetragonal space group P4¯21m. However, upon increasing chain length of the alkyl substituent, an isomorphous set is generated, with all three compounds crystallizing in the P21/c space group. The structures consist of pairs of radical π-stacks pinned together by strong intermolecular F•••S' bridges to create spin ladder arrays. The slipped π-stack alignment of radicals produces close non-covalent S•••S' interactions which serve as the “rungs” of a spin ladder, and the long chain alkyl substituents serve as buffers that separate the ladders from each other laterally. The “legs” of the spin ladder are generated by magnetic exchange along the π-stacks. Magnetic susceptibility measurements reveal the presence of very strong antiferromagnetic coupling in all three compounds, which have been successfully modeled as strong-leg spin ladders.