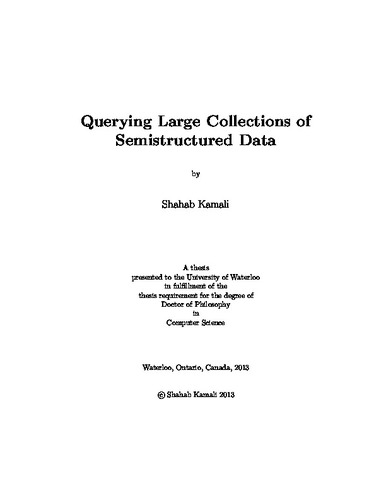 An increasing amount of data is published as semistructured documents formatted with presentational markup. Examples include data objects such as mathematical expressions encoded with MathML or web pages encoded with XHTML. Our intention is to improve the state of the art in retrieving, manipulating, or mining such data. We focus first on mathematics retrieval, which is appealing in various domains, such as education, digital libraries, engineering, patent documents, and medical sciences. Capturing the similarity of mathematical expressions also greatly enhances document classification in such domains. Unlike text retrieval, where keywords carry enough semantics to distinguish text documents and rank them, math symbols do not contain much semantic information on their own. Unfortunately, considering the structure of mathematical expressions to calculate relevance scores of documents results in ranking algorithms that are computationally more expensive than the typical ranking algorithms employed for text documents. As a result, current math retrieval systems either limit themselves to exact matches, or they ignore the structure completely; they sacrifice either recall or precision for efficiency. We propose instead an efficient end-to-end math retrieval system based on a structural similarity ranking algorithm. We describe novel optimization techniques to reduce the index size and the query processing time. Thus, with the proposed optimizations, mathematical contents can be fully exploited to rank documents in response to mathematical queries. We demonstrate the effectiveness and the efficiency of our solution experimentally, using a special-purpose testbed that we developed for evaluating math retrieval systems. We finally extend our retrieval system to accommodate rich queries that consist of combinations of math expressions and textual keywords. As a second focal point, we address the problem of recognizing structural repetitions in typical web documents. Most web pages use presentational markup standards, in which the tags control the formatting of documents rather than semantically describing their contents. Hence, their structures typically contain more irregularities than descriptive (data-oriented) markup languages. Even though applications would greatly benefit from a grammar inference algorithm that captures structure to make it explicit, the existing algorithms for XML schema inference, which target data-oriented markup, are ineffective in inferring grammars for web documents with presentational markup. There is currently no general-purpose grammar inference framework that can handle irregularities commonly found in web documents and that can operate with only a few examples. Although inferring grammars for individual web pages has been partially addressed by data extraction tools, the existing solutions rely on simplifying assumptions that limit their application. Hence, we describe a principled approach to the problem by defining a class of grammars that can be inferred from very small sample sets and can capture the structure of most web documents. The effectiveness of this approach, together with a comparison against various classes of grammars including DTDs and XSDs, is demonstrated through extensive experiments on web documents. We finally use the proposed grammar inference framework to extend our math retrieval system and to optimize it further.