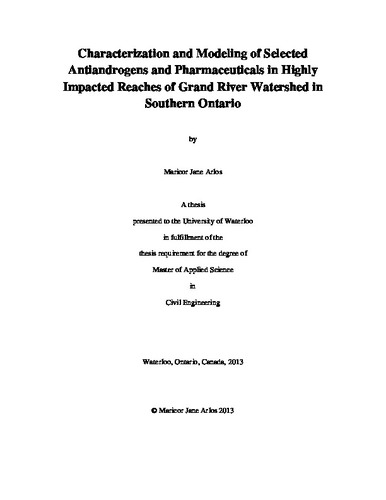 Endocrine disruption and high occurrences of intersex have been observed in wild fish associated with wastewater treatment plant (WWTP) effluents in the urbanized reaches of the Grand River watershed located in southern Ontario, Canada. WWTP effluent is a complex matrix with diverse aquatic environmental contaminants and stressors. This study aimed to: (1) characterize the spatio-temporal distribution and fate of antiandrogenic personal care products (triclosan, chlorophene, and dichlorophene), along with selected pharmaceuticals (carbamazepine, ibuprofen, naproxen, and venlafaxine) and the herbicide, atrazine in the Grand River watershed and (2) model the behaviour of these contaminants in the aquatic environment. Water sampling of 29 sites which covered six municipal WWTPs and ~100 km of river length was completed during summer low flows (July 2012). Monthly samples were also collected immediately upstream and downstream of a major WWTP (Kitchener) from August to November 2012. Many of the target pharmaceuticals and triclosan were detected in WWTP effluents in the Grand River watershed, especially those that did not nitrify (minimal treatment with high ammonia). Chlorophene was either undetected or was only found at trace levels in the effluents. Under low flow conditions, triclosan and several other pharmaceuticals exhibited a spatial pattern where concentrations increased directly downstream of the WWTPs, then decreased with distance downstream (dilution and/or degradation). Chlorophene, in contrast, was not found downstream of most of the WWTP outfalls but was first detected at a site 5 km upstream of a WWTP and then continued with relatively constant concentrations for approximately 29 km downstream. It was also only found during the summer sampling period. Atrazine was consistently found in all sampling locations which reflected the agricultural non-point source nature of this compound. The WASP 7.5 model (US Environmental Protection Agency) was adapted and calibrated to a reach of the Grand River associated with the Kitchener WWTP. The simulation of the fate and transport of the target compounds revealed that flow-driven transport processes (advection and dispersion) greatly influence their behaviour in the aquatic environment. However, fate mechanisms such as biodegradation and photolysis also potentially play an important role in the attenuation of most compounds. The exception was carbamazepine where it was shown to act as a conservative tracer compound for wastewater specific contaminants in the water phase. The fate model developed can be applied in the future to predict the fate of a wide variety of contaminants of emerging concern across the watershed to help define the exposure of these biologically active chemicals to sensitive ecosystems.