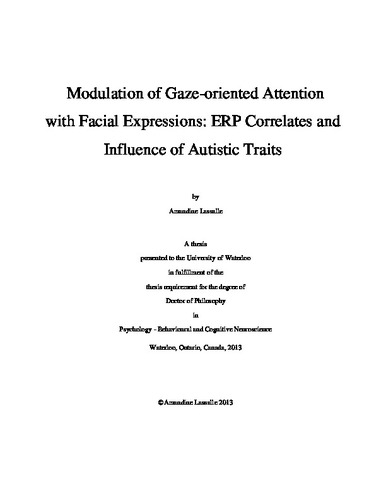 The direction in which another is looking at triggers a spontaneous orienting of attention towards gaze direction in the viewer. However, whether the facial expression displayed by the gazing individual modulates this attention orienting is unclear. In this thesis, the modulation of gaze-oriented attention with facial expressions was explored in non-anxious individuals at the behavioral level and at the neural level using Event-Related Potentials (ERP). In the gaze-cueing paradigm used, a dynamic face cue averting gaze and expressing an emotion was presented, followed by a lateral, to-be-localized target. At the behavioral level, a faster response to targets appearing at the gazed-at location (congruent targets) than to targets appearing opposite to the gazed-at location (incongruent targets) was observed (Chapters 3-5). This so-called Gaze Orienting Effect (GOE) was enhanced with fearful, angry and surprised expressions relative to neutral and happy expressions and was driven by emotional differences in response speed to congruent targets (Chapters 3-5). These effects could not be attributed to better discrimination of those emotions when presented with an averted gaze (Chapter 2). These results confirm the impact of fear and surprise on gaze-oriented attention in non-anxious individuals and demonstrate, for the first time, a similar impact for angry expressions. All the emotions enhancing the GOE signal an evolutionary relevant stimulus in the periphery, are threat-related and carry a negative valence, which suggests that one of these attributes (or all combined) is driving the emotional modulation of gaze-oriented attention (surprise is treated like fear in the context of fearful expressions). In Chapter 4, the effect of the dynamic cue sequence on these GOE modulations was investigated. An emotional modulation of the GOE was found only when the gaze shift preceded the emotional expression, but not when the emotion was expressed before gaze shift or when expression and gaze shift were simultaneous. These results highlight the importance of using a sequence closer to real life situations (we usually orient attention before reacting to an object in the environment) in studying the modulation of the GOE with emotions. At the neural level, we investigated the ERPs associated with gaze-oriented attention at target presentation and at cue presentation (Chapters 3 and 5). Confirming previous reports, the amplitude of a target-triggered P1 ERP component was larger in the congruent than in the incongruent condition, reflecting enhanced processing of gaze-congruent targets. In addition, cue-triggered ERPs previously observed in response to arrow cues, were investigated. An Early Directing Attention Negativity (EDAN) and an Anterior Directing Attention Negativity (ADAN) were found, indexing respectively attention-orienting to the cued location and maintenance of attention at the cued location. This is the first study to report both EDAN and ADAN components in response to gaze cues. These results show clear markers of attention orienting by gaze at the neural level, during both cue and target processing. Neither EDAN nor ADAN was modulated by emotion. The congruency effect on P1 was enhanced for fearful, surprised and happy faces compared to neutral faces in Chapter 3 but no differences between the emotions were found in Chapter 5. Thus, the emotional modulation of the brain processes involved in gaze-oriented attention is very weak and protracted or occurs mainly between target onset and response to target. The relationships between participants’ autistic traits and their emotional modulation of gaze-oriented attention were also investigated. Results showed a negative correlation with the GOE to happy upright faces and with the P1 congruency effect, which suggests that individuals with more severe autistic traits are less sensitive to the impact of social emotions like joy. The implication of these results for attention orienting in general and for individuals with Autism Spectrum Disorder is discussed. Together, the findings reported in this thesis clarify the behavioral and neural processes involved in gaze oriented attention and its modulation by facial expression in addition to demonstrating a relationship between gaze oriented attention, its modulation with social emotions and autistic traits.