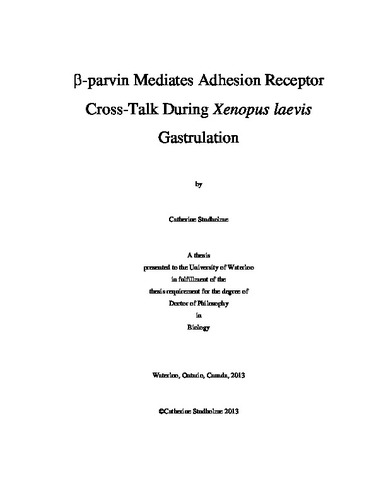 Modulation of cell adhesion is essential to the cell rearrangements that characterize Xenopus gastrulation. The spatial and temporal regulation of cell movement requires a highly coordinated cross-talk between cadherin and integrin adhesion receptors. Beta-parvin is an integrin associated scaffolding protein consisting of two calponin homology (CH) domains. Xenopus beta-parvin is highly conserved being ~95% similar to mammalian orthologs. Beta-parvin is expressed in the blastocoel roof and dorsal marginal zone of the embryo during gastrulation, suggesting a potential role in morphogenesis. Over-expression of full-length beta-parvin has no effect on embryogenesis, however, over-expression of either CH domain causes a failure in gastrulation. When over-expressed the CH1 domain causes a failure in fibronectin (FN) matrix assembly, epiboly and convergent extension in vivo. CH1 domain over-expression also inhibits tissue separation (TS) and Brachet’s cleft formation. The CH1 domain of beta-parvin localizes to sites of cell-cell adhesion, and down-regulates C-cadherin adhesion through activation of Rac1, independent of receptor expression. Significantly, the CH1 domain can rescue convergent extension downstream of integrin ex vivo suggesting a role for beta-parvin in the integrin mediated control of cell intercalation. Over-expression of the CH2 domain also inhibits morphogenesis in a similar fashion as CH1. However, the CH2 domain localizes to sites of integrin adhesion and inhibits integrin function resulting in a loss of FN assembly. The CH2 domain binds ILK and inhibits integrin function. When over-expressed the CH2 domain promotes TS in the pre-involution mesoderm through the activation of Rho. While the CH1 domain inhibits TS through Rac and the CH2 domain promotes TS through Rho, full-length beta-parvin over-expression has no embryonic phenotype and its signaling properties appear to be intermediate between expression of either isolated CH domain. At the dorsal lip full-length beta-parvin shuttles between integrin in the pre-involution mesoderm and cell-cell adhesion sites in the post-involution mesoderm indicating it plays significant roles in the previously characterized integrin-cadherin cross talk. My research has defined novel roles for beta-parvin as a key player in the regulation of integrin-cadherin cross-talk during tissue morphogenesis.