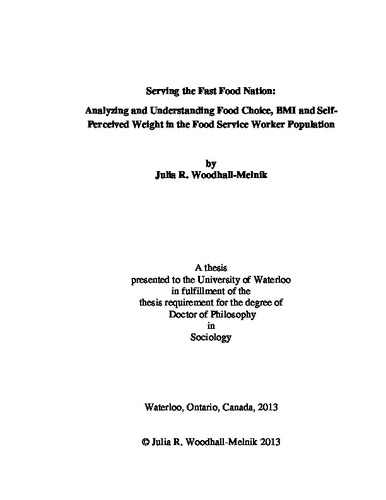 Policymakers, politicians, and media outlets have declared an obesity epidemic. In doing so, they have named a variety of villains, including fast food. Despite the framing of fast food as being a leading contributor to weight gain and obesity, we have yet to understand the impact that fast food has on those who work with it every day. The purpose of this dissertation is to understand the food choices, BMIs, and self perceived weights of the food service worker population. Using Pierre Bourdieu’s concepts of habitus and field, I investigate the role of the workplace and external cultural influences, such as the family, in navigating an obseogenic workplace environment that is centered on selling highly caloric food to the Canadian public in a quick and cost effective manner. The first stage of this research addresses the question: Are food service workers more likely to be overweight or obese and perceive themselves as being overweight compared to the general population? In order to do this, I analyzed secondary survey data from the Canadian Community Health Survey cycle 5.1 (2009-2010). I used logistic regression techniques to construct models that analyze the likelihood of having high BMIs and high self perceived weights in both the food service worker and general Canadian populations. In addition to this, I sought to understand the food choices that contribute to weight gain in fast food workers. To do this, I conducted forty semi-structured qualitative interviews with workers from a variety of fast food chains. The results of my research disprove my original hypothesis that food service workers are more likely to be overweight or obese because of their frequent exposure to fast food. Instead, I found that they are less likely to be overweight or obese than the general Canadian population. Additionally, they are also less likely to perceive themselves as being overweight or obese. Through the qualitative interviews, I found that these individuals participate in a process of regulation where they monitor their food intake at work. Additionally, I found that their consumption patterns stemmed from habitus generated through cultural exposures in other areas of their lives. Pierre Bourdieu (1984) argues that we develop habitus through meaningful cultural exposure. We use our habitus, or engrained dispositions, to navigate hierarchical spaces or fields. Through this research, I found that workers viewed their jobs as being temporary and their cultural consumption patterns did not seem to change from their exposures to their workplaces. The majority were part time students, working in this industry to pay for living expenses and tuition. For the most part, they were raised in middle class homes where their mothers prepared food for their families from scratch on a daily basis. Fast food was viewed as a special treat and not an item to consume on a regular basis. I conclude that the meaningful exposures we have to food and cultural norms throughout life are more important in determining our food choices than our exposure to fast food restaurants.