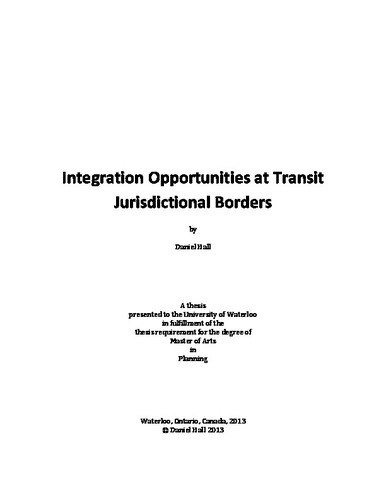 The Greater Toronto and Hamilton Area faces numerous transportation challenges now and in the future: congestion, population growth, and an inadequate public transit network. The metropolitan region has also changed in form in past decades, shifting from a monocentric to a polycentric region, further compounding the challenges. Currently, the public transit service is delivered by 9 different agencies comprised of 6 municipal providers, 2 sub-regional providers, and 1 regional provider. A region possessing a multiplicity of agencies suggests an overabundance of jurisdictional borders - borders that can potentially restrict travel across them. This thesis seeks to determine the impact of the presence or the omission of jurisdictional borders on transit patrons. A comparative approach is employed to investigate the benefits and costs to patrons and agencies through greater integration of specific origin-destination (OD) pairs. The chosen methods selects OD pairs that are known to be transit competitive, possess a high travel demand, and cross a transit-jurisdictional border. The relationship between transportation and land-use is relied upon to select clusters of dense employment or population, called activity centres, where public transit is known to compete well with the private auto. The travel demand between these centres is obtained using the 2006 Transportation Tomorrow Survey and the current optimal transit routing is determined using Google Trip Planner. Three OD pairs are selected that possess the most onerous transfers, a proxy for poor integration. Another three OD pairs are selected that possess seamless or no transfers using a variety of modes. In both cases, the existing transit routing is compared to an alternate routing to understand the benefits achieved through inter-jurisdictional integration; the first compares existing trips to improved inter-jurisdictional routes while the second compares existing trips to exclusively intra-jurisdictional routes. Through identification of 40 employment and 29 population activity centres in the region, and the acquiring of travel demand between them, the six case study OD pairs are selected. The three OD pairs investigated, with onerous transfers, are comprised of trips between Brampton-Mississauga, Hamilton-Burlington, and Brampton-Toronto. The remaining inter-jurisdictional case study OD pairs are made up of three different modes: conventional bus, express bus, and regional rail. They comprise trips between Toronto-York Region, Brampton-Mississauga, and Mississauga-Toronto respectively. This study finds that in all cases, the routes with greater integration reduce total travel time and the generalized cost to patrons. Additionally, the penalty due to transferring is reduced through integration implying a current barrier existing at some jurisdictional borders. For the agencies, the cost of delivering the suggested inter-jurisdictional service varies dramatically. The costs are translated into a quantity of additional patrons necessary to justify the operation investment while maintaining the current revenue/cost ratio. These findings provide insight into the current transit network. Promoting integration throughout the network will help attract new riders as the generalized cost of travel is reduced. Also, when inter-jurisdictional connections are made, such as in the case of the Brampton-Mississauga Zum service, the beneficiaries of that service are widespread and not limited to the corridor in which the service operates.