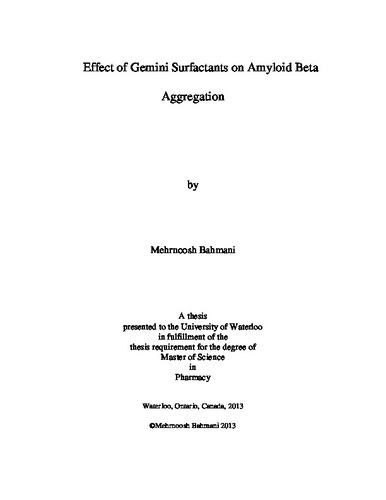 Alzheimer’s disease (AD) is a progressive dementia affecting cognition, behavior, and functional status and there is no cure which exists for it. In AD, Amyloid Beta (Aβ) peptides form aggregates that are neurotoxic in the brain. Hence, molecules that are able to prevent Aß aggregation could be effective in AD treatment. Gemini surfactant (GS) molecules consist of two hydrophilic heads separated by a covalently bound spacer and two hydrophobic tails. Their structure gives rise to a number of unique properties, including low critical micelle concentrations, the ability to form multiple types of aggregates (governed primarily by the nature of the spacer group) and enhanced ability to bind to polymers. These properties make gemini surfactant a good choice for solubilizing very hydrophobic materials such as Aß. The aim of this study was to examine various GS structures to help us to understand their interaction with Aβ and the influence of spacer group in Aβ disassembly. We employed 12-carbon tail GS with varying spacer groups of different hydrophilicities, such as: (-CH2-CH2-O)m, (-CH2)m, N(CH2)m, OH(CH2)4 and (OH)2(CH2)4. Surface tension measurement, isothermal titration calorimetry (ITC) and dynamic light scattering (DLS) have been employed to observe the gemini-Aβ interaction. Surface tension measurements did not show a typical surfactant-polymer interaction; rather, the presence of Aß induced aggregate formation at concentrations well below the cmc. Headgroup areas were observed to decrease for some of the surfactants in the presence of Aß, which may result from partial neutralization of the surfactant headgroups and a relaxation of electrostatic repulsion resulting in decreased head group areas. ITC results suggest substantial reorganization of Aß/gemini surfactant aggregates, with distinct difference seen depending upon the nature of the headgroup. It was observed that in 12-(CH2)n-12 (n=2,3,4,7) shorter spacer gemini surfactants have stronger interaction with Aß than the ones with longer spacers. In the 12-4(OH)n-12 series, a stronger interaction was observed in the GS with 2 hydroxyl groups compared to one hydroxyl group GS. For 12-(EO)n-12 GS, a stronger interaction was observed in that GS with two ethoxy groups. In the 12-XN-12 series, although the 8N spacer is more hydrophilic than 5N, the interaction of 12-5N-12 with Aß was stronger than that of 12-8N-12. The particle size data also revealed that there is an interaction between gemini surfactant and Aß. It appeared that mixed micelles formed when the surfactant concentration increased in the Aß solution. Overall, it was observed that changes in the length and hydrophilic character of the gemini surfactant spacer influenced the type of interaction and gemini-Aβ conformation.