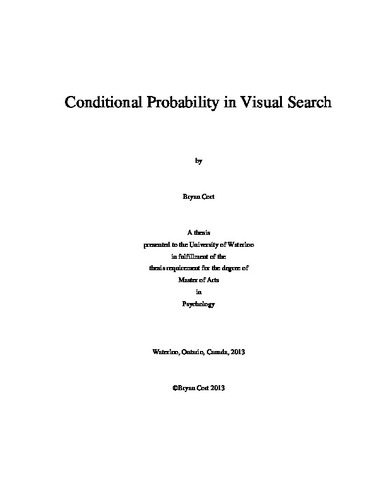 I investigated the effects of probability on visual search. Previous work has shown that people can utilize spatial and sequential probability information to improve their performance on visual attention tasks. My task was a simple visual search in which the target was always present among a field of distractors, and could take one of two colors. The absolute probability of the target being either color was 0.5; however, the conditional probability – the likelihood of a particular color given a particular cue combination – varied from 0.1 to 0.9. I found that participants searched more efficiently for high conditional probability targets and less efficiently for low conditional probability targets. This modulation of efficiency was reduced or abolished when participants were not explicitly informed of the cue-target relationships. After establishing this effect, I investigated its mechanism using eye tracking methods. Early in trials, participants fixated preferentially, but not exclusively, on areas of the screen which contained predominantly stimuli of the color to which they had been cued. As the trial progressed, this color bias shifted to the target color. I conclude that search efficiency is modulated by the conditional probability of target features and that this is a top-down process that benefits from explicit knowledge of the probabilistic relationship between cues and targets, and that the modulation is a result of more efficient eye movements towards stimuli with a greater probability of being the target of search.