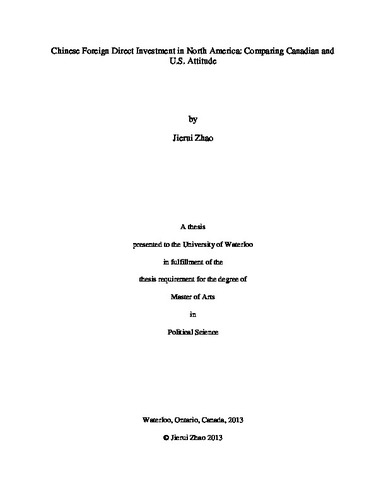 As China’s economy becomes larger—naturally, the global outflow of China’s foreign direct investment (FDI) has also been increasing at a rapid pace. One of the most popular regions for Chinese investment today is North America. Yet despite China’s great enthusiasm to invest in Canada and the US, Chinese firms have received much antagonism in North America. Often times, Chinese acquisitions are viewed in a negative light, and are even denied on grounds which appear to be erroneous. This study asks an important question: what are the political reasons and conditions behind the acceptance and rejection of recent Chinese FDI in North America? To answer this question, this study analyzed and compared Canada and the US in great detail. By observing the sectorial distribution of Chinese FDI, the institutional constructs, as well as the most controversial cases of Chinese takeovers in both countries, the study has found that hegemonic competition and institutional structure plays a major role in the evaluation of Chinese FDI. Hegemonic competition creates the perception that Chinese FDI is a threat in the US, while the institutional structure in US allows the negative perceptions of China to influence the FDI evaluation process. Derived from the two major factors, secondary factors such as the policy preference of lawmakers, as well as the type of FDI itself are also important determinants of Chinese FDI in North America. As a result, Chinese FDI is more likely to be denied in America. While in Canada, due to the absence of a Sino-Canadian rivalry, Chinese FDI is perceived with more normalcy. Hence, Chinese FDI is less likely to be denied in Canada.