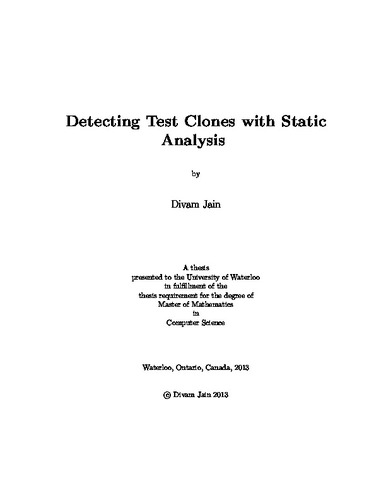 Large-scale software systems often have correspondingly complicated test suites, which are diffi cult for developers to construct and maintain. As systems evolve, engineers must update their test suite along with changes in the source code. Tests created by duplicating and modifying previously existing tests (clones) can complicate this task. Several testing technologies have been proposed to mitigate cloning in tests, including parametrized unit tests and test theories. However, detecting opportunities to improve existing test suites is labour intensive. This thesis presents a novel technique for etecting similar tests based on type hierarchies and method calls in test code. Using this technique, we can track variable history and detect test clones based on test assertion similarity. The thesis further includes results from our empirical study of 10 benchmark systems using this technique which suggest that test clone detection by our technique will aid test de-duplication eff orts in industrial systems.