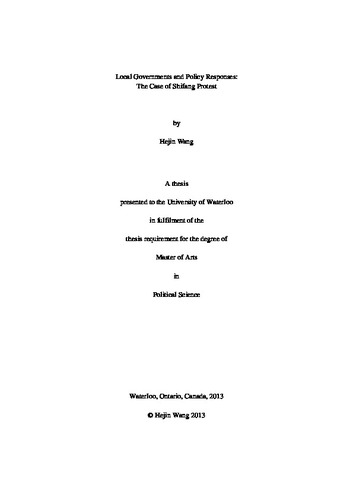 Most research on Chinese protests’ outcomes focuses on aspects such as the strength, resources, and strategy choices of these protests. Although studies on Chinese contentious politics have taken great consideration of the significant role played by the state in the political process, little attention has been paid to the state itself which is actually the provider of “political opportunity”. With a state-centered perspective, this thesis examines how elite division within the authority shapes the Chinese local governments’ policy responses to popular protests. Based on a case of protest in Shifang, an environmental protest targeting the Shifang local government on its construction of a chemical plant, this study shows an elite division between the Shifang local government and the police force who were dispatched to Shifang to maintain stability by its vertical professional leadership and how this division has contributed to a successful policy outcome of this protest. To further understand the Shifang case in a larger institutional background of China’s modern political climate, this chapter provides a possible explanation that the elite division in the Shifang case is an embodiment of the structural division between Chinese local governments and the stability maintenance system which has grown into a powerful interests group as a result of the policy priority of maintaining rigid social stability in the last decade.