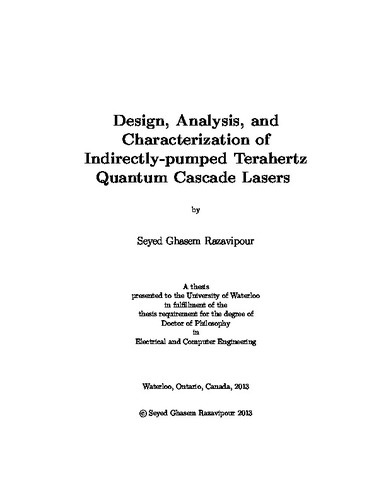 Quantum cascade laser (QCL), as a unipolar semiconductor laser based on intersubband transitions in quantum wells, covers a large portion of the Mid and Far Infrared electromagnetic spectrum. The frequency of the optical transition can be determined by engineering the layer sequence of the heterostructure. The focus of this work is on Terahertz (THz) frequency range (frequency of 1 - 10 THz and photon energy of ~ 4 - 40 meV), which is lacking of high power, coherent, and efficient narrowband radiation sources. THz QCL, demonstrated in 2002, as a perfect candidate of coherent THz source, is still suffering from the empirical operating temperature limiting factor of T ≈ ħω/kB, which allows this source to work only under a cryogenic system. Most of high performance THz QCLs, including the world record design which lased up to ~ 200 K, are based on a resonant phonon (RP) scheme, whose population inversion is always less than 50%. The indirectly-pumped (IDP) QCL, nicely implemented in MIR frequency, starts to be a good candidate to overcome the aforementioned limiting factor of RP-QCL. A rate equation (RE) formalism, which includes both coherent and incoherent transport process, will be introduced to model the carrier transport of all presented structures in this thesis. The second order tunneling which employed the intrasubband roughness and impurity scattering, was implemented in our model to nicely predict the behavior of the QCL designs. This model, which is easy to implement and fast to calculate, could help us to engineer the electron wavefunctions of the structure with optimization tools. We developed a new design scheme which employs the phonon scattering mechanism for both injecting carrier to the upper lasing state and extracting carrier from lower lasing state. Since there is no injection/extraction state to be in resonance with lasing states, this simple design scheme does not suffer from broadening due to the tunneling. Finally, three different THz IDP-QCLs, based on phonon-photon-phonon (3P) scheme were designed, grown, fabricated, and characterized. The performance of those structures in terms of operating temperature, threshold current density, maximum current density, output optical power, lasing frequency, differential resistance at threshold, intermediate resonant current before threshold, and kBT/ħω factor will be compared. We could improve the kBT/ħω factor of the 3P-QCL design from 0.9 in first iteration to 1.3 and the output optical power of the structure from 0.9 mW in first design to 3.4 mW. The performance of the structure in terms of intermediate resonant current and the change in differential resistance at threshold was improved.