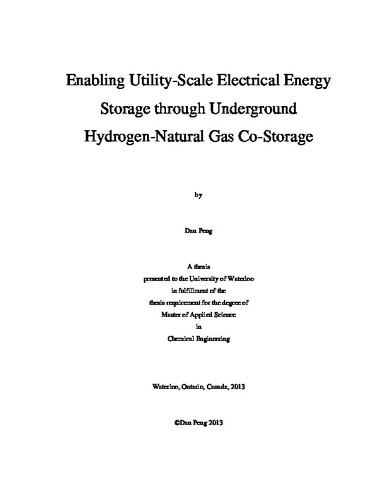 Energy storage technology is needed for the storage of surplus baseload generation and the storage of intermittent wind power, because it can increase the flexibility of power grid operations. Underground storage of hydrogen with natural gas (UHNG) is proposed as a new energy storage technology, to be considered for utility-scale energy storage applications. UHNG is a composite technology: using electrolyzers to convert electrical energy to chemical energy in the form of hydrogen. The latter is then injected along with natural gas into existing gas distribution and storage facilities. The energy stored as hydrogen is recovered as needed; as hydrogen for industrial and transportation applications, as electricity to serve power demand, or as hydrogen-enriched natural gas to serve gas demand. The storage of electrical energy in gaseous form is also termed “Power to Gas”. Such large scale electrical energy storage is desirable to baseload generators operators, renewable energy-based generator operators, independent system operators, and natural gas distribution utilities. Due to the low density of hydrogen, the hydrogen-natural gas mixture thus formed has lower volumetric energy content than conventional natural gas. But, compared to the combustion of conventional natural gas, to provide the same amount of energy, the hydrogen-enriched mixture emits less carbon dioxide. This thesis investigates the dynamic behaviour, financial and environmental performance of UHNG through scenario-based simulation. A proposed energy hub embodying the UHNG principle, located in Southwestern Ontario, is modeled in the MATLAB/Simulink environment. Then, the performance of UHNG for four different scenarios are assessed: injection of hydrogen for long term energy storage, surplus baseload generation load shifting, wind power integration and supplying large hydrogen demand. For each scenario, the configuration of the energy hub, its scale of operation and operating strategy are selected to match the application involved. All four scenarios are compared to the base case scenario, which simulates the operations of a conventional underground gas storage facility. For all scenarios in which hydrogen production and storage is not prioritized, the concentration of hydrogen in the storage reservoir is shown to remain lower than 7% for the first three years of operation. The simulation results also suggest that, of the five scenarios, hydrogen injection followed by recovery of hydrogen-enriched natural gas is the most likely energy recovery pathway in the near future. For this particular scenario, it was also found that it is not profitable to sell the hydrogen-enriched natural gas at the same price as regular natural gas. For the range of scenarios evaluated, a list of benchmark parameters has been established for the UHNG technology. With a roundtrip efficiency of 39%, rated capacity ranging from 25,000 MWh to 582,000 MWh and rated power from 1 to 100 MW, UHNG is an energy storage technology suitable for large storage capacity, low to medium power rating storage applications.